At public hearing, a show of support for Brian Matney 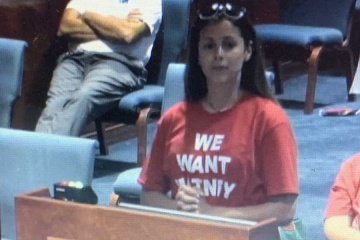 Former student Carley Martinette speaks on behalf of Matney at the Board of Education meeting.

After listening to more than an hour of public comments offering support for Currituck County High School (CCHS) Principal Dr. Brian Matney at its June 25 meeting, the Currituck County Board of Education voted 3-2 not to reconsider its prior decision not to renew Matney’s contract.

Board member Will Crodick made the motion to amend the agenda in order to introduce a motion to renew Matney’s contract, an effort to reverse a 3-2 board decision on the June 5 that was based on a recommendation by former Superintendent Mark Stefanik and effectively ends Matney’s stint at CCHS. His contract is set to expire June 30.

Board Chairman Karen Etheridge, Dwan Craft and Bill Dobney cast the deciding votes, the same majority that voted to not renew Matney’s contract on June 5. Janet Rose voted in favor of Crodick’s motion.

Matney, who is completing his second year as principal at the high school, has received an outpouring of support from the community. One platform for that support is a #WeWantMatney petition on the change.org that has now collected 936 signatures, with comments singing the principal’s praises.

Some members of the public who spoke at the June 25 board of education meeting — during which public comment was extended from 30 to 90 minutes — sported colorful T-shirts that read, “We Want Matney.”

“Stop the hurting,” asserted Crodick, who left his seat at the dais to speak at the podium during public comment. Pointing to what he described as the district’s high administrative turnover rate, he said, “Keep the king of the castle…You’ve heard from the teachers. You’ve heard from the kids. Do the right thing.”

Stefanik, whose last day as superintendent was June 12, released a letter on June 10 defending the board’s actions and the process used to reach the decision on Matney. Details and circumstances surrounding the non-renewal of Matney’s contract have not been revealed because of personnel and privacy laws.

Stefanik noted in the letter that a five-hour hearing was held on June 5 in which Matney, represented by his attorney, had the opportunity to present evidence and cross-examine witnesses called by the administration. He asserted that the letter provided “reasonable and needed assurances that the board has considered this matter fairly, carefully and with the attention it deserved.”

He added that the short notice gave him no time to resolve the issues. “Those concerns include my need to more thoroughly share my vision, heighten my visibility, clearer communication and keeping pace with teacher evaluation deadlines,” he continued, noting that he was committed to professional growth, receptive to constructive counsel and dedicated to addressing the concerns.

Close to 20 parents, teachers, students, alumni and elected officials spoke in support of Matney during the June 25 public comment period, praising him for his dedication to students and staff. One speaker voiced support for the board’s decision.

Destiny Moyers, a 2020 CCHS graduate, was among the students who spoke. “Dr. Matney truly treats every student as his own, even if they don’t really talk to him that much,” she said. “So why waste your time trying to find someone new to support our schools just as much as he does, when you can keep your biggest supporter here?”

Anita Rubino, a CCHS art teacher and 19-year veteran teacher of Currituck County Schools, also praised Matney. “These students are thriving under Dr. Matney, who consistently extols their achievements,” she asserted. “Dr. Matney values each and every one of our students.”

CCHS Mathematics Department Chair Robert Griffin told the board that in his 23 years, he has worked under nine different principals. “Dr. Matney’s professionalism and credentials are as strong as any principal I have ever worked with,” he said.

Currituck County Commissioner Paul Beaumont also lauded Matney during the public comment period. “I have never, in his entire tenure at the school, ever encountered anyone who had anything but positive things to say about [Matney],” he said.

Beaumont also said he had “zero faith” in Stefanik and had been “very unimpressed by the level of detail and analysis that the former superintendent invested in our school system…I don’t think he was very fair in the way he treated [Matney] or very sincere in helping him succeed.”

Following public comment, Board of Education Chairman Karen Ethridge told the audience that she based her decision on the facts that came out of the hearing. “Please know this decision was not taken lightly,” she said. “I wish I could share the reasons, but unfortunately I cannot. Anyone who knows me personally knows that there must be a reason I voted the way I did.”

Crodick, however, contended that the decision to not renew Matney’s contract was based on “a handful of complainers who won’t put their name to anything…We couldn’t remove him with the evidence and cause, we couldn’t terminate him.”

He continued, “So, all they could do is build this little case and paint him with a scarlet letter. They’ve ruined a man’s career, ruined his life, ruined these kids’ lives and put the whole county in a turmoil, over what? Because he is a good guy, because he likes people to succeed at any level in their education…Beat me with a rubber hose, guys. This is a sham.”

Etheridge quickly responded, “You’re not telling the truth. You’re out of order, Mr. Crodick. I’m about to ask for censorship.”

For his part, Matney told the Voice in a text message on June 26 that he was “overwhelmed by the sentiments shared by teachers, parents and, most of all, my students. As an educator, it is my privilege to serve such standout young people, dedicated professionals and caring adults.”

As for the next steps, he noted, “I’ll be taking the weekend to continue to reflect on all that was presented by the speakers” at the meeting.