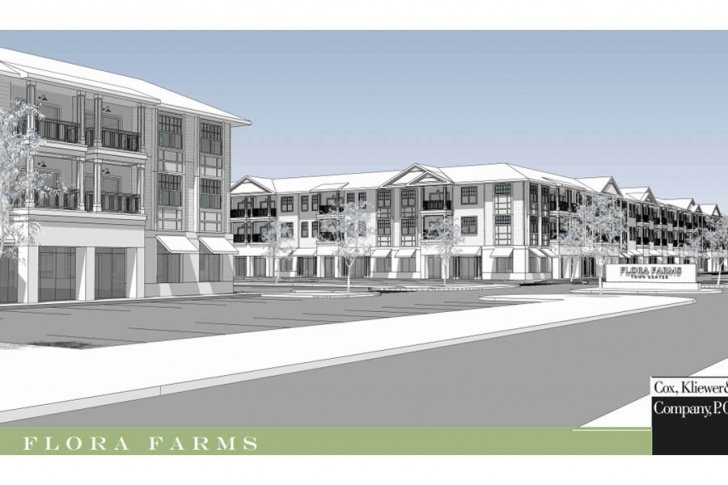 Rendering of part of the massive Flora Farms project

Following a June 22 public hearing, the Currituck County Board of Commissioners voted to table until next month a rezoning request that would pave the way for Flora Farms, a planned 410-unit development in Moyock just south of the Eagle Creek subdivision and Moyock Middle School.

If approved, the zoning change would be the first step in what would be a massive project developed in phases over the course of the next several years. Filed by applicants John Flora and Mary Nell Brumsey, the request was narrowly approved by the county planning board, which voted 3-2 earlier this month to recommend that the commissioners approve the rezoning of 224 acres from Agricultural to Planned Development-Residential.

Mark Bissell of Bissell Professional Group, one of the designers and developers for the project, did not return requests by the Voice for an interview.

The county planning staff, however, has indicated that it does not support the zoning change, and in a memo earlier this month, cited concerns over adequate school capacity, traffic and inconsistencies with the county’s Unified Development Ordinance.

In an interview with the Voice, Currituck County Planning and Community Development Director Laurie LoCicero also pointed to the Moyock Small Area Plan, which was adopted in 2014 in response to citizen concerns over the potential for exponential growth in that area of the county.

The Flora Farms planned development would include 285 single-family dwelling lots, up to 100,000 square feet of commercial development with 125 upper-story dwelling units that would be designed with a Main Street feel. Included in the plans would be 67.5 acres of open space and recreational amenities that would include a clubhouse, swimming pool, nature overlook and dog park.  An independent Wastewater Treatment Plant is also proposed for the development.

In addition, 22 acres of the site are slated for an elementary school, which the Currituck County Board of Education in May voted as its primary site for such construction. With Moyock Elementary School currently at capacity, the board is currently moving forward with plans to add four modular classrooms to accommodate 80 students in an effort to ease overcrowding.

While school construction is estimated to be completed in August of 2023, LoCicero noted that budget constraints could potentially delay the project. The current overcapacity and uncertainty, she noted, “is one reason staff couldn’t recommend approval.”

In a May letter to the Currituck Board of Commissioners and Planning Board, former Currituck County Schools Superintendent Mark Stefanik — who recently resigned that post to take a job in Ohio — said that the developer has committed to reserving 10 percent of the apartment units in the development for workforce housing for teachers. In addition, it has agreed to pay for the storm water design for the school site as well as expand the private pool to a competition-level pool and allow designated times for Currituck County High School swim team practices.

According to the phasing schedule, the single-family lots would begin to be cut out and recorded in August of 2021 and completed in 2023. LoCicero told the Voice that if county commissioners approve the zoning change in July, the applicant will have to secure state and local permits, finalize its Storm Water Master Plan and then return to the board to seek a use permit for a preliminary plat.