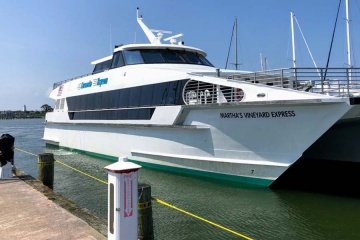 Perhaps few were surprised on April 28 when the N.C. Department of Transportation announced that it canceled its 2020 contract for the Ocracoke Express passenger ferry. Financial woes and a pandemic were a bad combination for it to resume this year.

Then word got out that the North Carolina General Assembly was working on legislation that would fund the passenger ferry after all. On Wednesday, Senate Bill 750, introduced by First District Sen. Bob Steinburg (R-Chowan), passed unanimously and it is on its way for Gov. Cooper’s signature.

The legislation authorizes the Department of Transportation’s Ferry Division to lease, pending completion of a successful route verification, a passenger ferry vessel for operation between Hatteras and Ocracoke, starting July 1 and ending no later than Sept. 10.

It allows the DOT to use up to $1,146,179 of the contingency funds appropriated in the act to be used by the Ferry Division to lease and operate the ferry. The bill also includes $6 million for a new heating and air conditioning system and chiller at Elizabeth City State University.

NCDOT spokesman Tim Hass said that once the bill becomes law, they will be able to move forward as to how it will operate amid the COVID-19 pandemic and if there will be a ticket price.  “Our hope is that we can take all the necessary steps quickly,” he said.

Sixth District Rep. Bobby Hanig (R-Currituck) introduced an amendment in a House subcommittee that added the $1.146 million from a legislative discretionary fund to cover the costs of leasing and operating the Hatteras-Ocracoke passenger ferry. “Reviving the passenger ferry will be a much-needed boost to the Ocracoke and Hatteras economy that was devastated by Hurricane Dorian,” Hanig told the Ocracoke Observer in an email Wednesday night.

In a joint statement to the Observer, Steinburg and Hanig said, “We are pleased by the passage of the $1.2 million for the Hatteras-Ocracoke (passenger) ferry. Under the best of circumstances, we know that the ferry has been successfully operational. We know that the ferry is critical to Ocracoke as the island has taken a multitude of gut punches, starting with Hurricane Dorian last September. We are hopeful that the operation of the ferry will be a good start to making Ocracoke heal.”

The passenger ferry was introduced in 2019 as a transportation alternative for people traveling between Hatteras and Ocracoke islands with ferry going directly into Ocracoke village.

Last year, the Ferry Division leased a 150-passenger ferry, M/V Martha’s Vineyard Express, from Seastreak Marine out of New Jersey from late May to Labor Day.

Its popularity exceeded expectation with more than 28,600 people using it last summer. With passenger-only ferry in service, the waiting times for the vehicle ferry between the islands were significantly decreased according to Ferry Division statistics, especially by visitors traveling to Ocracoke for day trips.