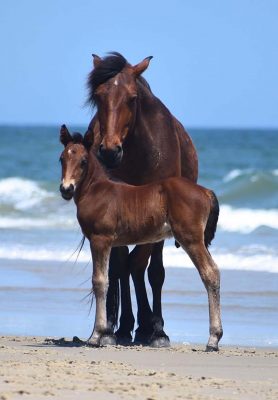 Friday evening, we lost Danny, a yearling colt, in a horrific, devastating, completely preventable way. Danny choked on an apple. When we say that apples and carrots KILL wild horses, we are not kidding. We are not being overly dramatic. We are not using scare tactics. Danny was killed by humans who had no regard for the safety of the horses.

Danny most likely had an obstructed esophagus for days before being found by someone who recognized he was in distress and called us. If you see something, CALL 911 IMMEDIATELY.

We arrived on the scene Friday morning and under the direction of our vet, administered a sedative to try and relax his esophagus and allow the obstruction to pass. He was loaded into the trailer and taken to the rescue farm where the vet was waiting for us. The sedative did help pass the obstruction (the apple), but upon examination, we discovered that it had been lodged in his throat long enough to cause an infection and most likely a rupture to his esophagus.

We got Danny as stable as possible (he was not stable enough to travel to the hospital at NCSU) but at about 7:30 Friday night, Danny died. He most likely suffered a traumatic head injury from thrashing around for days while he was choking, and it’s also likely that the damage to his esophagus caused bleeding into his lungs. If this is hard for you to read, we can promise you it was much harder to witness in person, and it was absolute hell for Danny to suffer through.

All of this could have been prevented. The herd doesn’t deserve to lose a young horse like this. But here we are. So, let’s not let Danny’s death be in vain. Stop feeding the horses. Stop touching the horses, Stop interacting with the horses. If the horses come up to you, walk away. Secure your belongings on the beach. Pick up your garbage. Call and report infractions that you witness.

Educate yourselves about the horses and the ways you can help protect them: https://www.corollawildhorses.com/learn/

Don’t let this happen again. We are begging you to please help us keep these horses safe. Please don’t let Danny’s death be in vain.