OBX visitor season booms for some, lags for others 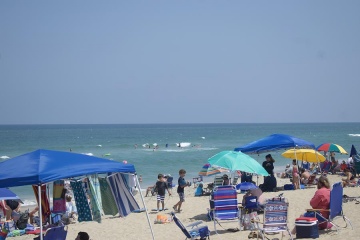 Despite the challenge of a once-in-a-century pandemic, the 2020 Outer Banks peak season is booming as local property management companies report unprecedented occupancy levels this summer.

But while the bypass and beaches are playing host to large streams of visitors these days, not every lodging venue is sharing equally in that bounty. Some larger hotels on the beach, facing a different set of obstacles, are struggling in the summer of 2020. Meanwhile, representatives of the smaller mom-and-pop motels that line the Beach Road say they are holding their own during this unusual season.

For property management companies, 2020 went from disaster to windfall once the bridges were opened to guests in May. “It’s been overwhelmingly busy,” Dan Hardy, General Manager of Joe Lamb, Jr. & Associates said. “I mean it’s been from early May when we thought we were going to have a good season, [it’s] probably been as good a season as we’ve ever had.”

Myra Ladd-Bone, President of Atlantic Realty, agreed, saying, “When they opened up the bridge, the phones were ringing so fast. I mean it was incredible.” Mid-June through August have always been the peak season for visitation on the Outer Banks. Yet even in the best of years, there would be an occasional vacancy, or a week that was perhaps at 99% instead of 100%. Rental management companies say this year, rentals are filled to the brim.

The strong occupancy numbers come even as New Jersey, New York and Connecticut require travelers returning from North Carolina to self-isolate for two weeks – a deterrent to some wanting to vacation here. There have been cancellations because of that policy, but according to Hardy, the vacancies are quickly filled. “We’re getting three cancellations a day, right now, and I hope it doesn’t increase, but certainly it’s having an impact,” he said. “I can’t really tell if it’s slowing reservations at all. We’re so full it’s hard to know.”

Monica Thibodeau, managing partner of Carolina Designs Realty agreed, “Overall our occupancy is still really high because when we do get a cancellation, we are seeing them, particularly the smaller homes, just fill right up again. Daily, sometimes within hours.”

“People that were supposed to be going to Europe, somewhere, or even going to California, they don’t want to get on an airplane,” she noted. “We’re a convenient drive-to destination. Plus, we feel remote.”

The increase in visitation has not been universal. And to that end, there is interesting data in the May 2020 occupancy report, which is the latest one to be released by the Outer Bank Visitors Bureau (OBVB).

Dare County did not reopen to visitors until May 16, and occupancy revenues for that month were down 22.6%. But even though half the month was over before the bridges were again opened, property management company revenue was only down 9.5% for the month compared to 2019. In stark contrast, hotels and motels were down 62.1%.

“The hotels and motels have been struggling to get to where they would typically be,” said Lee Nettles, OBVB Executive Director. “They’re having a tough time.”

For the larger hotels, there has been improvement since late spring, but it has been slow in coming and sporadic.

“Overall, the occupancy has improved, absolutely, from that first time that we opened back in May,” Jamie Chisolm, President of the Outer Banks Hotel-Motel Association, said.

But Chisolm, who is also the Director of Sales and Marketing for the Hilton Garden Inn in Kitty Hawk, noted that for the larger hotels with national affiliations, there are some hurdles that make a full recovery difficult.

“We’re very different from the rental industry,” she said. “Branded hotels, right now their response to the COVID-19 crisis has been to relax their cancellation policies. So with us, unfortunately, if we have a rainy week, we’re going to lose a lot of occupancy for the week. So. we can’t count on our occupancy staying stable. It’s really become weather-based.”

There are other issues confronting the branded hotels as well. Because they are charging a premium price for their service, guests expect those amenities to be available. COVID-19 has changed that.

“Most branded hotels are not doing cleaning service while the guest is there. So, if you check in for four nights, you’re typically not going to receive that coming in every day to clean your room,” Chisolm said.

At “the Hilton Garden Inn at this point, we are doing takeout-only for breakfast,” she continued. “Our fitness center, of course, is closed. Things like our game room have stayed close and we have occupancy limits on our swimming pools. So, some of those amenities that guests are used to and feel that they’re paying for — they feel that those amenities aren’t there.”

Chisolm noted that what she is describing is happening with the larger hotels. “I am speaking particularly about branded hotels at this point. The mom-and-pops obviously work slightly different,” she said.

It does appear as though the smaller, family-owned Outer Banks motels are holding their own, and in some cases, thriving.

The Islander Motel has been a part of the Nags Head beach experience for more than 30 years. For owner Betsy Seawell, the season started slowly, but may prove to be one of the best she has had.

“When they opened everything up, we expected the floodgates to open. It really wasn’t, but we did fill up for Memorial Day weekend,” she said. “And we had all that rain [in June], nobody was here. But then once the middle of June came around…it’s been [very busy] ever since.”

The Foreman family has owned the Sea Kove Cottage Court in Kitty Hawk for over 40 years and for manager Shea Foreman, 2020 seems much like every other summer.

“Most places like us have their regular client base,” he said. “Some of them have been coming for two and three decades and some still have been coming since before we even bought it in the 70’s. So, we’ve got our regulars and they hate to miss. We are staying pretty much full.”

There are still questions about what the fall will bring. Property management companies and the family-owned motels are indicating strong bookings and interest through September.

“We’re gonna have a terrific fall,” Ladd-Bone said. “I think a lot of the people who didn’t come in the spring will come in the fall because the rates drop and the weather’s good. I think too, it depends on what’s going to happen with schools. If they’re doing remote learning in other states, there’s no reason why they can’t come here.”

For the larger hotels though, the outlook is not as clear.

Autumn has traditionally been one of the most popular times for weddings on the Outer Banks. With bans on large gatherings, Chisolm feels it will impact larger hotels.

“The other piece for us that’s missing hotels is meeting space,” she said. “That would be myself [at the Hilton Garden Inn], people like the Ramada, the Sanderling, hotels that did a huge wedding business. Obviously, those mass gatherings are not happening.”

But in spite of the challenges that the Hilton and other major hotels are encountering, Chisolm remains optimistic.

“It’s going be a very different recovery for us, but we’re going to get by,” she said.