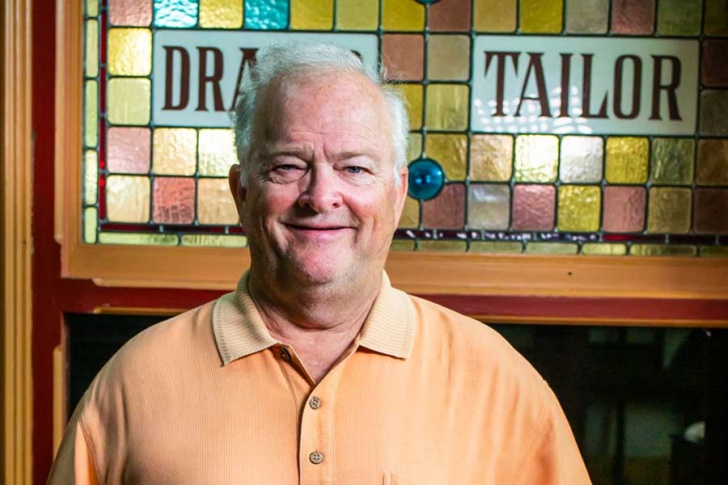 As is the case with many businesses, the COVID-19 pandemic has turned one well-known local restaurant operator’s plans upside down. But Mike Kelly hopes and believes that will only be temporary.

When Kelly’s Restaurant closed its doors in 2017, the Outer Banks not only lost an iconic restaurant and entertainment venue, it lost a brand that was synonymous with the area.  Mike Kelly was still active in the public eye, operating Pamlico Jack’s until its sale in 2019. And Mako’s Beach Grille is still going strong in Kill Devil Hills.

But the Kelly’s brand name existed only in the less-public catering business — Kelly’s Outer Banks Catering, which has operated since 1985 and still employs the familiar Kelly’s marlin-themed logo. Locals who attended the numerous charity, civic and business events — and visitors who sought catering for large social gatherings, such as weddings — were familiar with Kelly’s catering business and Mike Kelly was present at almost every event the business served.

In early March, when the COVID-19 virus was in its early stages and few could predict the path of the pandemic, he had decided to expand the catering business to serve much smaller groups.

While delivery of food from restaurants has been around for decades, especially in larger cities, services such as Grubhub, DoorDash and Uber Eats have greatly expanded consumer choices in the 2000’s and dine-in restaurants have jumped on board. Locally, a combination of factors —seasonal closings, overwhelmed kitchens in the summer, labor shortages, and a small year-round population — have made such amenities harder to pull off.

What Kelly had in mind back was to take the catering business and test the market by offering food delivery to residential addresses all year. His idea was a bit different than the typical delivery experience. But for families or smaller gatherings who merely wanted food without the labor-intensive on-site catering service, he felt there could be a market there.

With Kelly’s restaurant closed, he converted a warehouse he owned into a full kitchen to support the traditional catering service. And it was from this facility that he planned to launch the delivery option. He related how the catering business had evolved and how those changes encouraged him to try a new direction.

“When I started there wasn’t really a catering market here in 1985,” he remarked. But as the area grew, weddings, larger civic gatherings such as the Chamber After Hours meetings, huge fundraisers (Outer Banks Hospital, Wags & Whiskers), fishing tournaments, corporate parties and meetings all began to create a market. And for a time, Kelly’s was the only game in town.

In recent years Kelly noticed a shift in some customer demands. They still wanted the food catered, but many clients simply wanted the food delivered without the servers and all that goes with it. All of which led to the idea of launching a delivery service in 2020 to make full use of the new catering facility.

During our discussion back in March, the final plans had not been put in place, but the concept seemed to be solidifying around a minimum order in the $150 to $200 range, That price point could be met by a group as small as two (especially with wine included), but could be more easily met by family groups of four or more, or social gatherings such as backyard parties or small indoor gatherings of friends for an intimate party.

The food offerings would include classic entrees familiar to Kelly’s Restaurant patrons and smaller fare, such as burgers for the kids, would be available as long as the minimum order was met. In that aspect, the delivery service would more closely resemble a restaurant menu rather than the catering menus that require large orders of several items intended for a buffet line process. The catering website would allow online ordering of individual items with a special menu for the new delivery business.

It wasn’t long after we met that the pandemic and its effect on business models mushroomed in unpredictable ways. And in the blink of an eye, inside dining was halted and restaurants that never offered takeout or delivery before were suddenly left with those two choices as their only options to keep operating. The crisis also shut down the catering business and small and large gatherings, including wedding parties, were canceled.

Fast forward to July and we talk again with Mike Kelly to see where things stand now.

He laughs and kicks off by noting that “delivery and takeout is no longer rare—almost everyone is doing one or the other or even both,” he says.

He has shuttered the catering facility for now and is focused on Mako’s, which offers three options — dine in, takeout and delivery.

Kelly observed that some restaurants dropped delivery and even takeout when Phase 2 of the state’s re-opening planned allowed dine-in options at 50% capacity and it remains to be seen what restaurants will do post-tourist season and into next year.

As for Kelly’s catering and the planned delivery business, he is sure it will be put in place at some point in the future. But he’s realistically cautious.

“It could be as early as fall, but more likely later in 2020 or even early 2021. No one knows when the pandemic will get to a point where things return to a more normal cycle,” he states.

It also remains to be seen whether the public will continue to demand takeout and delivery options and how many competitors will continue to offer those options. So much is still up in the air.

But his catering facility will resume once that market returns and Kelly believes that by marketing to a higher minimum order and offering familiar single entrees as menu items, he is uniquely positioned to serve that market — if and when the pandemic allows the market experiment to move forward.

For now people can enjoy many of the familiar Kelly’s menu items at Mako’s. But perhaps in the not-too-distant future, the Kelly’s menu of days past will once again be available to consumers to enjoy for an intimate dinner at home with the family from a familiar and trusted name in the Outer Banks constellation of fine food.

For now there is a small gathering option on the catering website, kellysobxcatering.com, but one would need to call well ahead to discuss options and delivery dates.