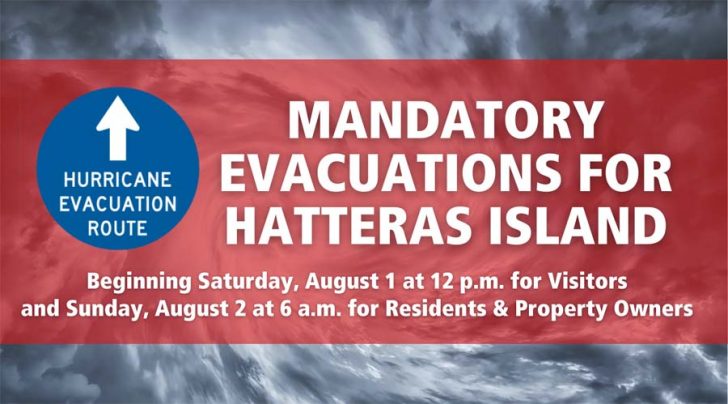 Dare County has declared a state of emergency and a mandatory evacuation went into effect for visitors at noon today as Hurricane Isaias heads for the coast of the Southeastern U.S.

Residents and property owners on Hatteras Island are under an evacuation order starting at 6 a.m. Sunday. Although Isaias will probably be a tropical storm with sustained winds a little below hurricane force of 75 mph in the next few days, surge, blowing sand, rain and overwash can easily inundate N.C. 12, the only route on and off the island.

County officials will meet again Sunday morning to decide if emergency measures will be necessary north of Oregon Inlet. 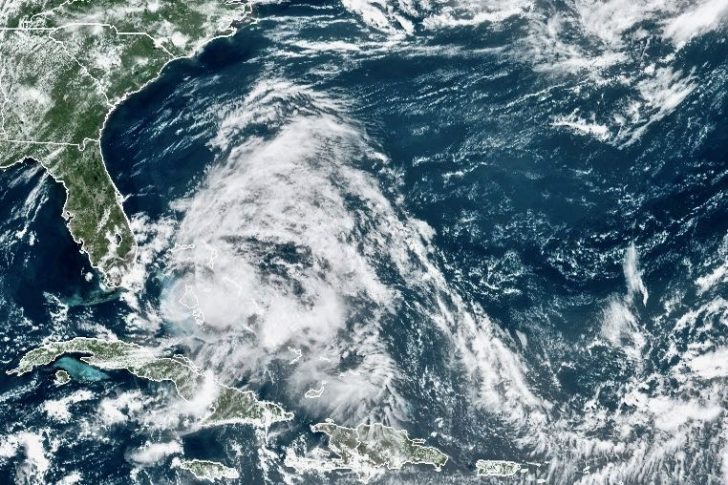 Here’s the latest from the Hurricane Center: 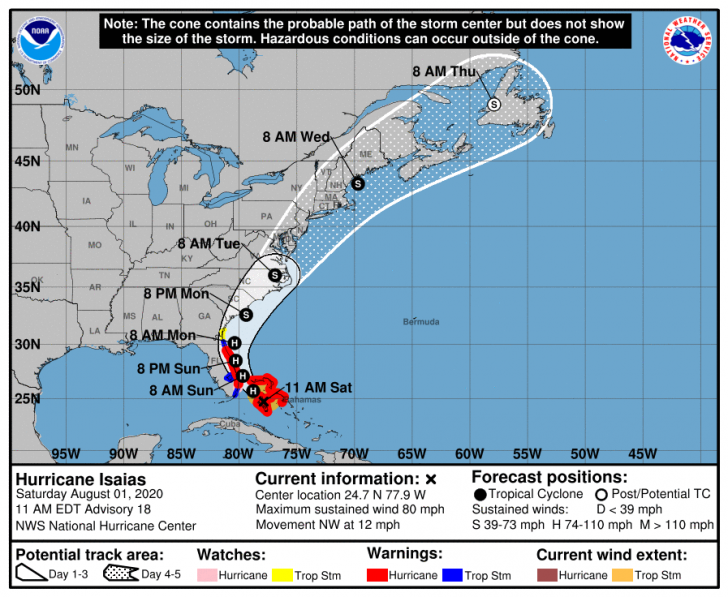 At 11 a.m. EDT, the center of Hurricane Isaias was
located by an Air Force Reserve Hurricane Hunter aircraft and
Bahamas radar near latitude 24.7 North, longitude 77.9 West. Isaias
is moving toward the northwest near 12 mph (19 km/h). A general
northwestward motion with some decrease in forward speed is expected
for the next day or so, followed by a north-northwestward motion by
late Sunday. On the forecast track, the center of Isaias will move
over northern Andros Island during the next few hours and move
near or over Grand Bahama Island in the Northwestern Bahamas later
today. Isaias is forecast to move near the east coast of the
Florida peninsula tonight through Sunday.

Reports from the reconnaissance aircraft indicate that maximum
sustained winds have decreased slightly to near 80 mph (130 km/h)
with higher gusts. Little change in strength is expected through
Sunday, and Isaias is forecast to remain a hurricane during this
time. Slow weakening is expected to begin by late Monday.

The Hurricane Center’s 11 a.m. update projects that the storm will weaken below hurricane strength of 75 mph and cross the coastline south of the Outer Banks. That would put the center moving west of the area but could leave the strongest winds on the storm’s eastern side over northeastern North Carolina.

A mandatory evacuation of Ocracoke Island is also under way.

Local officials met via video conference Saturday morning to receive a briefing from the National Weather Service and to coordinate actions necessary to ensure public safety across Dare County. With confidence increasing that Dare County will see significant impacts from Hurricane Isaias, a state of emergency has been issued for Dare County.

As part of the emergency declaration, a mandatory evacuation has been ordered for Hatteras Island visitors beginning Saturday, August 1 at 12:00 p.m. The evacuation order is for Evacuation Zone A which covers all areas of Hatteras Island, including the villages of Rodanthe, Waves, Salvo, Avon, Buxton, Frisco and Hatteras Village.

Now is the time for all Hatteras Island visitors to make final preparations, secure property and evacuate with all personal belongings and follow instructions from their property management company.

Decision makers will meet again on Sunday morning, August 2 to receive an updated briefing from the National Weather Service and determine whether protective measures are necessary for Evacuation Zone B which covers areas north of Oregon Inlet, including the towns of Duck, Southern Shores, Kitty Hawk, Kill Devil Hills, Nags Head, Manteo, and all unincorporated areas including Roanoke Island and the Dare mainland. More information on evacuations zones can be found at https://knowyourzone.nc.gov/

Due to the forecast for life-threatening rip currents along the county’s southern beaches, the state of emergency includes restrictions on ocean swimming for Hatteras Island. Everyone on Hatteras Island must stay out of the water as it is unsafe for even the most experienced swimmers.

Those evacuating to areas north of Dare County are encouraged to travel westbound on Highway 64 to Interstate 95. Evacuating through the rural areas to the west of Dare County will help avoid traffic backups and congestion that may prolong evacuation by traveling northbound through the Hampton Roads portion of Virginia.

Please note that Dare County’s new online reentry permitting system is now in effect and only reentry permits for the current calendar year are valid. Residents may still use a valid driver’s license with a Dare County address for reentry. A current tax bill or parcel data sheet with matching current government issued ID will also suffice. To review guidelines or apply for a permit, visit www.darenc.com/reentry.