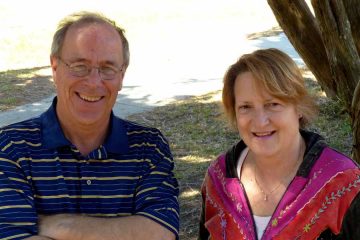 Congratulations to two pillars of OBX community journalism, Ocracoke Observer publishers Pete Vankevich and Connie Leinbach, who were honored with a Pelican Award from the North Carolina Coastal Federation this past week for their coverage of the destruction caused by Hurricane Dorian, which devastated Ocracoke Island last September.

A story for the Coastal Review Online, which is published by the North Carolina Coastal Federation, noted that, “Coastal Review’s relationship with the publishers was well established before the storm but has become more valuable while working to report the continuing challenges Ocracoke faces and the community’s resilience. They were key partners in the multipart series on changing attitudes toward climate science on the North Carolina coast that was part of the Pulitzer Center’s Connected Coastlines initiative.”

The story also quoted an email from Vankevich saying, “We are honored to receive the Pelican Award from the North Carolina Coastal Federation. The Ocracoke Observer’s mission is to provide news and information that impacts the Ocracoke community, much of which coincides with issues of interest to the Coastal Federation. We are also pleased to be a collaborating partner with the Federation’s Coastal Review Online.”