WHAT TO WATCH ON TV
Stream On: And now for something completely different—the children of Monty Python 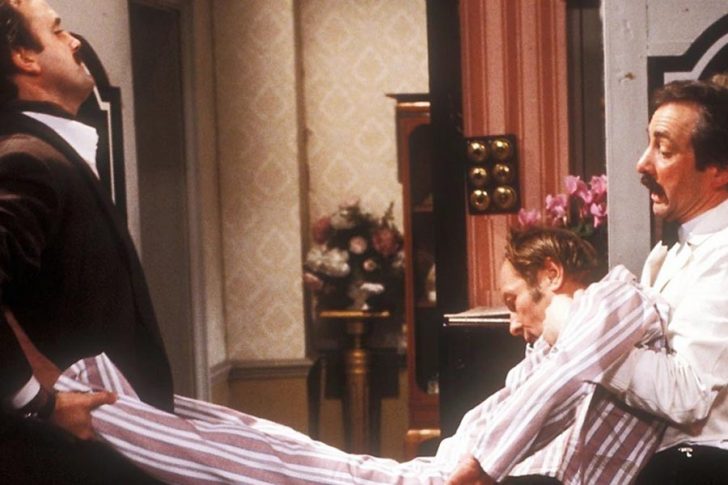 Hotelier Basil Fawlty (at left) and bellman Manuel deal with a dead guest. All in a day’s work at Fawlty Towers! (IMDb.com)

In 1969, Monty Python’s Flying Circus [official website] turned the world upside down with their surreal brand of sketch comedy. [Here’s where the half-hour series can be streamed.] The members of Python took their influences from comics like Spike Milligan and Peter Sellers, stars of The Goon Show [Wikipedia] in the 1950s, and the stars must have been in perfect alignment, as Monty Python’s Flying Circus became one of the greatest comedy shows on TV. One of the Pythons, John Cleese, tightened up the comedy for a 1975 sitcom, and British TV hasn’t been the same since.

In 1970, the Monty Python troupe booked rooms in an inn in Torquay, Devon, where they were filming on location. The proprietor was “the rudest man [John Cleese] had ever come across in [his] life.” A waitress confided to the Pythons that she thought her boss was “bonkers,” and completely unsuitable as a hotel proprietor. In 1975 Cleese ran with that idea, creating Fawlty Towers with his wife, Connie Booth, an actress who had appeared on the Flying Circus. In 1975 and 1978 Cleese and Booth wrote and starred in 12 episodes of Fawlty Towers (while divorcing between the first and second seasons).

Basil Fawlty (Cleese), an aggressive, sarcastic, and short-tempered hotel proprietor in Torquay, hates his life, his acerbic wife (Prunella Scales), and his hotel. He is tried especially by his slow-witted waiter, Manuel from Barcelona, who is trying to learn English on the job. His chambermaid, Polly (Booth), is a pretty and eclectic artist who might be the only competent person at the hotel.

The Major (Ballard Berkeley), is an amiable old alcoholic who spends much of his time looking for his newspaper and waiting for the bar to open at 6 p.m. He is not all there and seems to be the only guest that Basil likes.

The twelve episodes are so finely crafted that it’s hard to imagine a thirteenth, and while the show had a short run, it’s considered by many to be the best British sitcom ever. It is wildly funny, incorporating farce, slapstick, fish-out-of-water situations for Manuel, and Fawlty’s schemes to “raise the tone of the place.”

Some of the guests are deeply annoying, and probably deserve what they get. A rude American pulls a knife on Fawlty when he doesn’t know what a Waldorf salad is. A horrible deaf woman is confounded by Manuel, who doesn’t understand what she’s saying. Fawlty tells his wife he could run a first-rate hotel if he didn’t have all the guests getting in the way. [Here] is a trailer from the DVD box set. 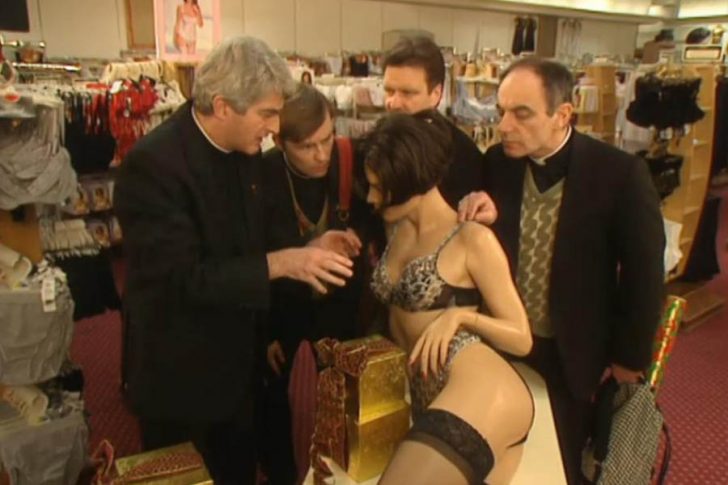 Father Ted Crillig (at left) and some colleagues become lost in the lingerie section of a department store. (IMDb.com)

In 2019 the show that was ranked second to Fawlty Towers in a list of “the greatest British sitcoms” compiled for the Radio Times, was Father Ted. An Irish show, I don’t believe it was broadcast in the States in 1995. I heard about it from a friend who had visited family in Ireland, sought it out and made a set of video CDs for myself. Nowadays it is a popular streamer, appearing on prime video and ad-supported on a half-dozen services.

Another exercise in outrageous farce and slapstick, it was wildly popular in the British Commonwealth: Sinead O’Connor and Bono requested to appear in the series, and Maurice Gibb of the Bee Gees was buried with a copy of the DVD box set.

Set on fictional Craggy Island, Father Ted concerns three priests, who, because of various scandals in their past, which are referred to only obliquely, are sent to operate a parish on this barely inhabited piece of rock in the Galway Bay. Father Ted Crilly (Dermot Morgan) is a morally dubious but hapless fellow who dreams of television stardom. Father Dougal McGuire (Ardal O’Hanlon) is a childlike, simple-minded priest exiled as punishment for unknown misdeeds. How he came to become a priest is unknown to Father Ted. Father Jack Hackett (Frank Kelly) is an ancient foul-mouthed alcoholic priest who spends most of the series comatose, when he isn’t on a bender or roaming the countryside nude.

Bishop Brennan (Jim Norton) is the priests’ Nemesis, having exiled them to Craggy Island (He refers to Father Jack as “the Kraken”). He lives in luxury on the mainland and is said to have a secret partner and a love child in America. He is often shown on the other end of a telephone conversation in a bubble bath, alone, and sometimes not. Mrs. Doyle (Pauline McLynn) is the repressed and insane parish housekeeper who spends her time plying the trio with tea and sandwiches, repeating “go on, go on, go on” until somebody relents. Father Dick Byrne (whose monicker provides a clue as to some of the show’s humor) resides over neighboring Rugged Island, with two priests similar to Father Dougal and Father Jack; these three are our heroes’ rivals in the strange contests these rustic priests get up to.

The action includes such episodes as the three priests hosting another, a deadly boring fellow, who is struck by lightning on the island’s only miniature golf course, and the show’s Christmas special, in which the three take a trip to the mainland and get lost in the ladies’ lingerie section of a department store, a scene from which is [here]. In “The Passion of Saint Tibulus,” Ted and Dougal pickett a local movie theater for showing smut, but end up giving the theater owner his best business “since Jurassic Park.” [Here] is the original BBC trailer.

Next time—the children of Frankenstein.