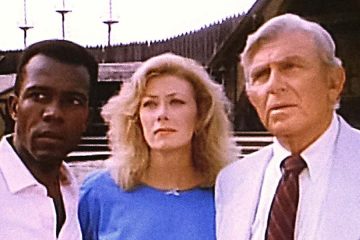 Manteo has a starring role in this Matlock episode.

For you early risers, Hallmark Movies & Mysteries Channel will be airing Andy Griffith’s tribute to his beloved Outer Banks – the two-part “Hunting Party” episode in the fourth season of Matlock — on Wednesday Aug. 26 at 6 and 7 a.m. The episode was filmed in Manteo and includes a heaping helping of local sights and residents.

To mark the occasion, we are re-running the Voice review from Peter Hummers.

Outer Banks local Andy Griffith filmed a double episode of Matlock here in 1989. In “The Hunting Party,” a character approaches the actual Outer Banks–our Outer Banks–in a four-seat Cessna and looks down on Dare County, before landing at MQI–Dare County Regional Airport in Manteo. Met at the airport by a local caretaker who is to drive him to the house in which he’s staying, he asks, “Can you show me where my brother was killed?” The next scene is in Poor Richard’s Sandwich Shop, where somebody even mentions The Lost Colony–and we’re off to the races!

The stranger runs afoul of a shady group of regular tourists, and a murder ensues, which implicates him. Next we see Ben Matlock in court in Atlanta, then answering a phone. He asks his assistant, “Have you ever heard of a town called Manteo, on Roanoke Island, in North Carolina?”

Ben is then seen getting shakily out of the Cessna at the Manteo airport, where he (spoiler!) wins the day! It’s a very good, double episode, but this time, locals found more to delight in than the national audience did. Filmed entirely on location, scenes take place in the Green Dolphin Pub and the Elizabethan Gardens.

When Ben arrives at the old courthouse in Manteo (where the trial sequences were filmed), Della Basnight, surrounded by Andy Griffith’s friends and actual Manteo locals, asks, “Are you him? The famous lawyer from Atlanta? Is that the suit?” referring to Matlock’s traditional seersucker suit. When Matlock goes into the courthouse, Della turns to the crowd. “What d’ya think?”

Apart from being a fine episode, “The Hunting Party” was a gift from Andy to his friends and neighbors on the Outer Banks. During the episode a deputy (Clarence Gilyard Jr., who joined the permanent cast at this point) takes Matlock on a tour of the community, pointing out Kellogg’s Supply, the Elizabethan Inn, and The Lost Colony stage. I think one interior was shot in Andy’s own home, where “Ben Matlock” remarks on how nice the house is!

Here are the closing credits.  Here is a link to the channel finder for Hallmark Movies and Mysteries.