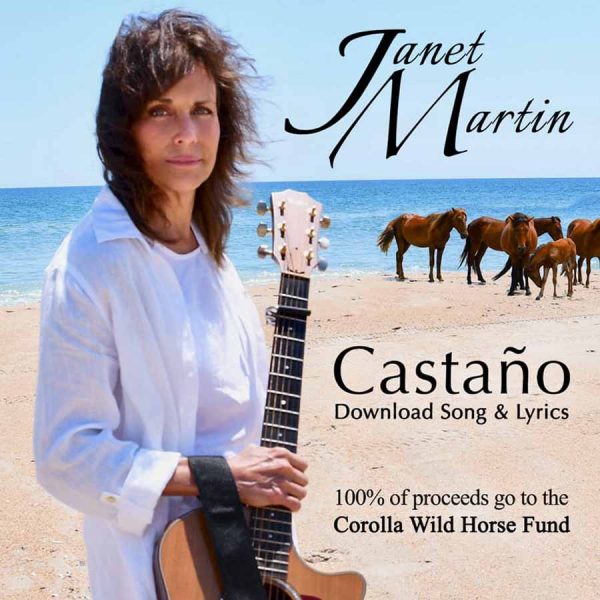 The song, video and lyrics are available as a download for $5. Supporters will be given an opportunity to donate more. Your donation will help us continue our crucial work. Thank you for your support!

The Corolla Wild Horse Fund is pleased to announce the kick-off of their fundraiser with a unique offering, a song, “Castaño,” about the wild horses that roam free on the northern banks of Currituck County.

Castaño” was co-written by Richmond-based, artist/songwriter Janet Martin http://www.janetmartin.com/and Kelly Wilkes, a Corolla Wild Horse Fund volunteer. “I contacted Janet with a song idea and just a few lines I had struggled with, and she ran with it, and it turned into more than I could have ever expected,” says Wilkes. “The song was written while Kelly and I were in the Outer Banks in early March. I spent part of the day walking on the beach, mulling over the history of this place, how free these horses have been for centuries here, and what they’ve endured. I went back to the cottage, picked up my notepad and guitar, and the song pretty much wrote itself,” says Martin.

“Castaño” performers: Janet Martin on vocals, guitars, and bass; Daniel Clarke, noted pianist for K.D. Lang and Ryan Adams on piano and organ; Linwood Bell composed and performed the orchestral arrangement. Bell is known for his work with Graham Nash, Josh Grobin, and the Boston Pops. And music producer, Bruce Olsen on drums/percussion and song engineering/producing, Olsen is known for producing projects by Grammy winner, George Winston, and regional bands, the Nighthawks and Waxing Poetics.