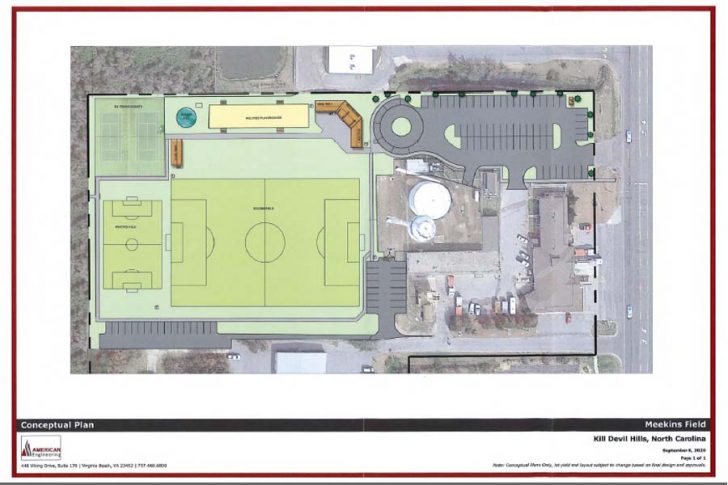 Rendering of plans for the Meekins Field park.

The Kill Devil Hills Board of Commissioners on Sept. 14 gave the green light to move forward with an $888,0000 project to turn Meekins Field park into a new and improved recreational facility that, along with already existing tennis courts, will include a soccer/multi-use field and smaller practice field.

The park, when completed, will also feature a large playground area, picnic shelters, an art wall and even a splash pad — an area for water play that will be the first of its kind in Dare County.

The Kill Devil Hills Board of Commissioners authorized town staff to apply for an Outer Banks Visitors Bureau Tourism Impact Grant to help fund the project. In February, the commissioners approved the recommendation by the town’s West Side Recreation Group to make the improvements to the park.

Of the grant application, Commissioner Terry Gray noted, “It’s a good way to take a recreation area and bring it to a state-of-the-art facility that will attract people. I am pretty excited about this.”

Under the terms of the grant, the municipality would have to provide at least 50 percent of the cost of the project, Planning Director Meredith Guns told the commissioners on Sept. 14. The Visitors Bureau typically announces recipients in December, and Guns said some preliminary site work could be done prior to that so the town would be able to move forward with construction quickly.

Guns said that some features of the park would likely be complete and open for use by the summer of 2021.

Currently closed due to construction of the new municipal water tower and communications monopole, Meekins Field has experienced significant disruption as a result of the projects and would have required significant funds to even return it to its previous condition.

The facility, when complete, will include a 64-space parking area with a circular drop off area and art wall. There will also be restrooms near the picnic shelter and a separate picnic shelter for the tennis courts. A sidewalk/exercise track will be installed around the entire facility. The access road that leads to the Emergency Medical Services facility on the south side of the project will also be widened to create a two-way traffic pattern.

The Visitors Bureau’s Tourism Impact Grants are designed to assist Dare County municipalities and non-profit organizations with projects, programs or services that are needed due to the impact of tourism such as beach accesses, walkways and attractions.

During the 2019-2020 fiscal year, the Outer Banks Visitors Bureau awarded $851,000 in tourism impact grants. Some of those projects included $90,950 for the Dare County Arts Council’s courtyard project, roughly $148,000 in pedestrian improvements in Duck, $221,885 for the first phase of Manteo’s Town Commons project and $25,750 in bridge and walkway improvements for the Frisco Native American Museum.

Commissioner B.J. McAvoy pressed the board to consider a turf alternative for the fields rather than sod, in exchange for eliminating another feature of the park such as the picnic shelter. But Guns said the picnic shelters, which do not exist at any other town park, are an important element of the plan that the Visitors Bureau will take into consideration.

Guns suggested that if the board wished to pursue turf in the future, it could seek an alternate bid for turf when the project goes out to bid in order to get an estimate. She also said the board could consider waiting to see if such an expense was warranted, and then include it in a future recreational facilities improvement plan.