WHAT TO WATCH ON TV
Stream On: There’s no business like show business—Orson Welles scared America and Superman committed suicide…or did they? 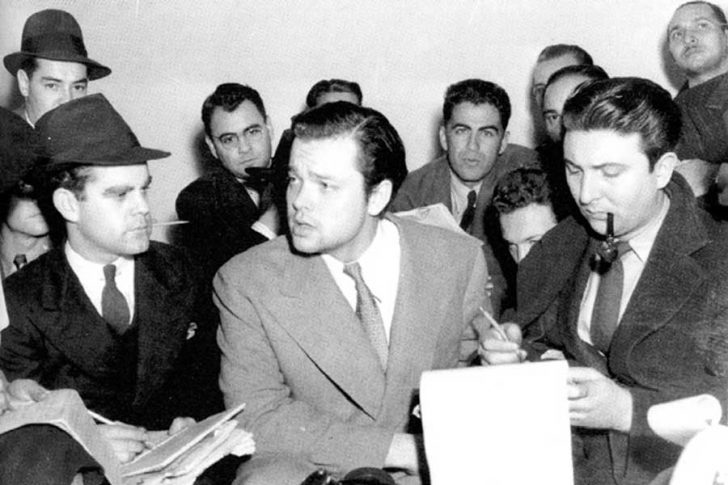 Orson Welles tells reporters that no one connected with the notorious broadcast of The War of the Worlds had any idea that it would cause panic. (Public domain)

On Halloween evening, 1938, actor and future filmmaker Orson Welles’ Mercury Theatre on the Air broadcast his adaptation of H.G. Wells’ 1898 novel The War of the Worlds over the CBS Radio Network. Reimagined as a series of radio news broadcasts, it was said to have caused panic among credulous listeners nationwide.

In 1959, actor George Reeves (Gone With the Wind), who had finally found fame playing Superman in the first feature film based on a DC comics character, Superman and the Mole Men, and the subsequent 1952 TV series The Adventures of Superman, died of a gunshot wound to the head, in his home. The death was ruled suicide, but Reeves’ mother paid for a reinvestigation of the case as a possible homicide.

The Mercury Theatre panic and the private investigation of Reeves’ death were the subjects, respectively, of a television play in 1957 and a film in 2006.

The CBS live anthology drama television series Studio One aired, in 1957, a teleplay about the public reaction to the 1938 radio broadcast of H.G. Welles’ The War of the Worlds.

In 1938, Orson Welles was 23 years old. Now widely regarded as one of the greatest filmmakers of all time, he had started out at the Federal Theatre Project, a part of the New Deal, to fund live artistic performances in the U.S. during the great depression. In 1937 he and John Houseman founded the Mercury Theatre, an independent repertory theatre company putting productions on Broadway. In 1938 the Mercury Theatre on the Air broadcast a radio production updating H.G. Wells novel about a martian invasion as a series of faux news bulletins. It supposedly caused widespread panic among gullible radio listeners (and can be heard in its entirety <here>).

“The Night America Trembled” intersperses portrayals of the in-studio radio cast doing the show with the panicked reactions of members of the listening public. A babysitter listens to the broadcast and places an emergency call to the baby’s parents, who are dining at a country club. The New Jersey State Police are bombarded by telephone calls from a frightened citizenry. A young couple out on a date hears the program while parked in ‘Lover’s Lane’ and rush home, much to the amusement of the girl’s parents, who had been listening to The Chase and Sanborn Hour on NBC starring Edgar Bergen and Charlie McCarthy, where there were no reports of Martians, and chuckled at the young couple’s naiveté. (Wikipedia)

“The Night America Trembled” featured a remarkable cast including Ed Asner, Vincent Gardenia, Warren Oates, Warren Beatty, and James Coburn, in the early days of their careers. It was hosted and narrated by Edward R. Murrow, but mentioned no names of the Mercury Theatre personnel involved, calling them Host, Director, First Announcer, Second Announcer, First Actor and so on in the credits.

It is an entertaining if dated production, albeit one which showed no skepticism toward its premise, which later on did draw some, due to the fact that the radio program didn’t have that large an audience (<Slate.com>). Orson Welles’ genius was matched by his audacity, so I wouldn’t be surprised if he played up that angle as a personal publicity hook. He certainly went on to great things; he filmed his masterwork Citizen Kane when he was 25 and while it didn’t recoup its costs at the box office, it was a critical and historical success and launched Welles’ long career. 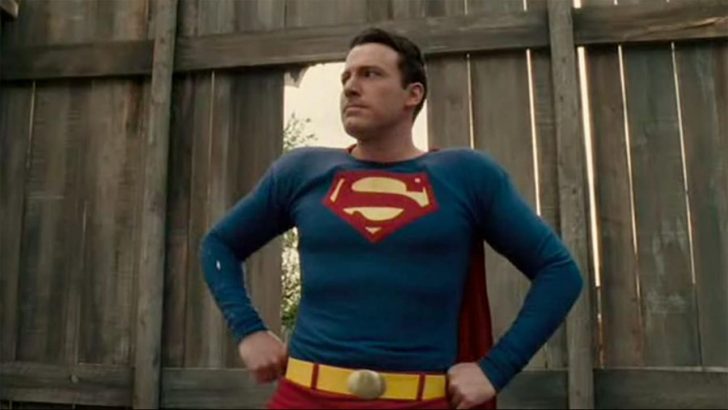 Did George Reeves (played here by Ben Affleck) actually shoot himself? Do we want to know? (IMDb.com)

Hollywoodland opens on a pair of detectives arriving at a crime scene in Hollywood in the 1950s. There are uniforms around, acquaintances sitting downstairs, and photographers. The detectives go to the scene upstairs and talk about the victim.

“The fiance said he was depressed—predicted he would do it. He went upstairs, she told her pals he was going to shoot himself.”

“Maybe she believed what she saw on TV,” says the first, picking up a publicity still from The Adventures of Superman. “Faster than a speeding bullet.”

The camera pans up, revealing a bullet hole in the ceiling.

Hollywoodland is a parallel study of George Reeves (Ben Affleck), whose own heyday came and went with an acting part in Gone With the Wind, and who reluctantly took a part (Superman) for the money, and fictional detective Louis Simo (Adrien Brody, The Pianist), the low-rent private investigator here hired by Reeves’ mother to contest the suicide ruling of her son’s death.

Simo, getting information around Los Angeles about the case under false pretenses, while at the same time creating dubious publicity for himself, has a young son, who lives with his mother, Simo’s ex-wife, and who takes Superman’s “suicide” badly. The boy feels cheated by someone he looked up to.

Maybe he believed what he saw on TV.

(Look usually to the title of a movie, play, book, etc. to see what the subject is.)

The various and credible theories of the crime portrayed in this very good-looking 1950s neo-noir are fascinating and the acting and writing are wonderful. You won’t look at The Adventures of Superman (which, by the way, can be streamed <on these platforms>) in the same way after this; you might not look at Hollywood in the same way either. Here’s a trailer: <IMDb.com>.

Next time, the long cons of Sneaky Pete and Shuteye.