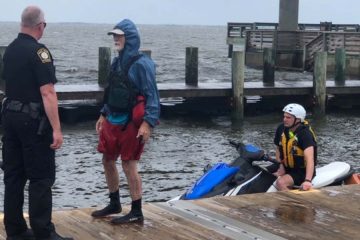 Salmon, in blue jacket, after his rescue. (Photo by Ray Turner of East Carolina Radio)

This account comes from Ray Turner of East Carolina Radio, an eyewitness to this rescue in the sound off Jockey’s Ridge 2:30 p.m. on Friday, Sept. 18.

Scott Salmon, 58, a resident of Northern Virginia, was in his 14-foot sunfish sailboat off Jockey’s Ridge this afternoon when his rotor came loose, and he was swept out into the sound. He was able to wave his arms and signal to passersby on the Pirates Cove Bridge. A couple from Baltimore MD notified the Nags Head Police Department. Nags Head Fire Department personnel was able to retrieve Salmon and return him safely to dry land.