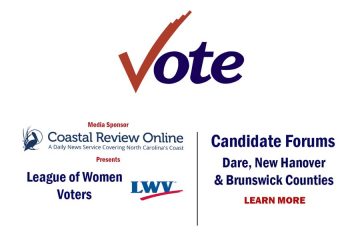 Four of the seven seats on both boards are up this fall. District 1 Commissioner Wally Overman, a Republican, and District 4 Commissioner Danny Couch, a Democrat, are running unopposed.

The one unopposed incumbent in the board of education races is District 4 Republican Mary Ellon Ballance. In District 1, incumbent Democrat Bea Basnight is competing against Republican Carl Woody II. Democrat Jen Alexander and Republican Susan Bothwell are facing off for an open seat in District 2. And At-large incumbent Republican David Twiddy is running against Democrat Charles Parker.

Register to join the school board candidate forum.

After registering, a link to attend the webinar will be sent to your inbox. This will allow you to join the webinar on the assigned date and time. Questions for candidates in each race may be sent to DareLWV@gmail.com. Include your name and town. The forums will also be recorded and made available on YouTube, Current TV and other local outlets.