It’s Basnight versus Woody in District 1

Both BOE candidates have experience in system 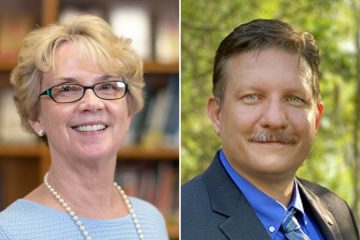 Incumbent Democrat Bea Basnight and Republican challenger Carl Woody II are vying for the District 1 seat on the Dare County Board of Education this November. Both candidates bring their experience working in the Dare County Schools system to the table.

Basnight, the current board chair who is completing her third term on the school board, was a Manteo Elementary School teacher for 35 years. Woody, now the Information Technology (IT) Director for the Town of Manteo, also served as the IT Director with Dare County Schools for 17 years.

Basnight told the Voice that she considers her position as a school board member to be a full-time commitment, and that she dedicates time every day to working on behalf of students, teachers and families.

If re-elected, she said she would continue to work on several initiatives, including her participation on a local committee charged with exploring avenues to increase teacher supplements; the district’s partnership with the College of the Albemarle to expand dual enrollment and vocational opportunities; and working to secure additional teacher housing, particularly on Roanoke Island.

Woody said in his Voice interview that he is running because the Dare County Schools “has been a big part of my life, and I have a lot of good ideas that I hope will benefit the students and staff.”

For one thing, he said he’d like to see more transparency when it comes to details of the district’s budget. “If you go to the Dare County Schools website, you’ll see maybe one or two years of the proposed budget, but not actually what was spent,” Woody noted. “I would like to see a web-based digital dashboard that shows where that money’s going.”

Woody also said he’s a proponent of open lines of communication between the school board and the staff to encourage the exchange of ideas and concerns.

In pointing to achievements during her tenure, Basnight said she was instrumental in securing property to expand Manteo Elementary School as well as in bringing the Carolina College Advising Corps. That program places a college advisor in each of the high schools and is funded primarily through the University of North Carolina.

Basnight said the school board has also hired two social workers in the past three years, adding that she supports funding additional positions if re-elected. “Particularly now with the pandemic, it’s a need throughout society. We need more social workers in our schools,” she said.

Woody said that if elected, he would prioritize the retention and recruitment of highly qualified employees and work to provide retirement incentives. As for affordable housing, he said he would work with the Dare Education Foundation to secure realistic housing options.

Woody also said he would like to see the school district partner with the U.S. Coast Guard to bring its Junior Leadership Program to the county’s high schools. The program, he said, emphasizes critical life skills such as discipline and integrity.

On that point, Basnight said she and other board members met with U.S. Coast Guard representatives two years ago about the idea of bringing the program to the three Dare County high schools. At the time, she said, there wasn’t enough interest on the part of parents and students.

As for the issue of when and how to return students to in-person instruction, Woody said that he would like to see elementary-aged students go back as soon as possible, while canvassing parents of middle and high school students to see whether they prefer in-person or remote learning. “I think you are going to have a mixed bag,” he said.

Basnight said that as a teacher, she knows that in-person learning is the best way for students to learn. “I want that for all students,” she stated, adding that the district is currently studying the options to return safely while continuing to provide a virtual option for those who want or need it.

The Board of Education is expected to take up the issue of re-opening schools at its Oct. 1 special meeting.