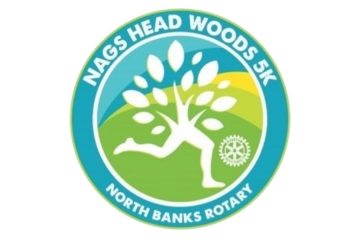 The Nags Head Woods 5K has been a tradition for Outer Banks locals and visitors alike for more than three decades. Held each Mother’s Day weekend, the popular race hosted by the North Banks Rotary Club winds through the maritime forest and attracts hundreds of runners and families each year.

This past May, however, COVID-19 restrictions prevented the club from hosting the event and continued restrictions have made it impossible to postpone the event until this fall.  But the organization has found another way to keep the tradition alive during its 37th year.

It’s going virtual. And in a way, it’s going global.

Participants can register for the race online for $30. Runners can either choose to run the Nags Head Woods course on their own or run the distance virtually anywhere in the world, and then simply enter their time by Dec. 31. All net proceeds from the event will go directly to Interfaith Community Outreach (ICO), a local charity that provides financial assistance to Dare County residents in crisis.

“We are pretty optimistic we will get a good turnout,” said John Windley, president of the North Banks Rotary Club. “This is the race’s thirty-seventh year and to be able to sustain the annual event is really special. The race has a special history and we really want to celebrate that.”

Traditionally, the race brings in about $20,000 a year, and while Windley is optimistic, he recognizes the organizers are in uncharted waters. “We’ve always had the tried and true Nags Head 5K,” he said. “This being such a new way…we just don’t know what we’re going to do [in terms of proceeds]. We could do better than we ever expected.”

Windley said that organizers opened registration over Labor Day weekend and extended the virtual race through Dec. 31 to allow time for people who may want to plan a trip to the Outer Banks to run the Nags Head Woods course. But, he added, the nice thing about being virtual is they can lace up and run the 3.1 miles from anywhere.

Hoping to tap into a popular Outer Banks market, Windley said the club was marketing the virtual race in areas such as Richmond, Pennsylvania and Virginia Beach to attract more runners. And while the rotary typically uses the proceeds toward awarding a number of annual grants and scholarships, Windley said that the club opted to do things differently this year and “cut to the chase and have one lone beneficiary.”

He added that the money people spent to register is going to a good local cause. “All the money is staying in Dare County, helping people in need,” Windley asserted. The club, he added, selected ICO because of its ability to respond very quickly to those residents in crisis.

“So many people have been impacted by COVID…[ICO] is a great partner,” Windley pointed out.

ICO Executive Director Jenniffer Albanese said her organization was grateful for the receiving the proceeds. “It will help since all of our fundraisers have been canceled [due to COVID-19]. In these unknown times, it’ll be a nice boost to the budget,” she said.

Those who had already registered for the May race before COVID-19 hit were able to transfer their registration to the virtual race, receive a free entry for next year’s race or get a refund.

Noting that the Nags Head Woods 5K is the longest standing running race in Dare County, Windley acknowledged, “We hated to lose the traditional format but are really excited to have this new virtual [race].”

The race is being organized by Matt Costa, race director at Outer Banks Running Company. Participants can register to run the Nags Head Woods 5k at https://nagsheadwoods5krun.org.