WHAT TO WATCH ON TV
Stream On: Graham Greene called them “entertainments” 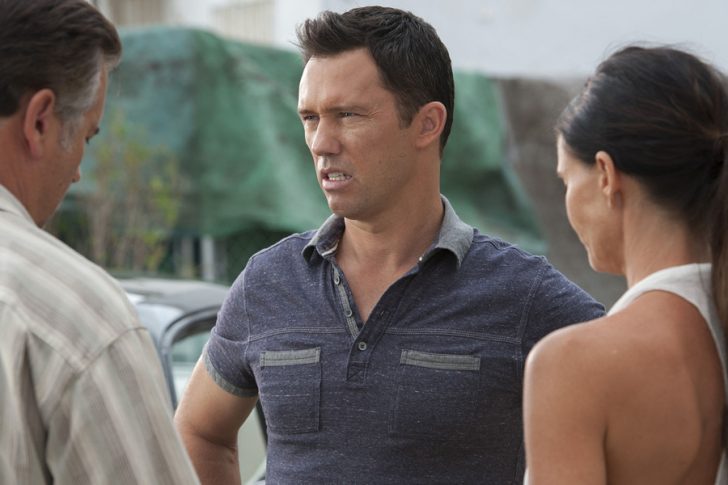 A spy recently disavowed by the U.S. government uses his special ops training to help others in trouble. (USANetwork.com)

In this age of high-concept television, a certain kind of show has fallen between the cracks—shows descended from such as MacGyver and Mission: Impossible. Novelist Graham Greene called his “light” fiction entertainments—situation dramas, I’ll call them. What the audience takes from these series from week to week is entertainment, pure and simple. These shows are alive and well…actually, both of this week’s entries have finished, although Leverage is in the process of being rebooted for <IMDb TV>.

The first sign that we are along for the fun, and to not be taking the coming action too seriously, is the sight of spy Michael Weston (Jeffrey Donovan, <Shut Eye>) standing ramrod-straight in a meticulous gray business suit and looking at his watch in a village in Nigeria. One could spot him from space.

We get the first of his famous voiceovers, which are anecdotes and tutorials in spycraft, most of which seem quite credible: “Covert intelligence involves a lot of waiting around. Know what it’s like being a spy? Like sitting in your dentist’s reception area 24 hours a day. You read magazines, sip coffee, and ever so often someone tries to kill you.”

He is picked up at gunpoint by locals in a Mercedes-Benz and driven to a meeting with “wannabe warlord Boris” in a posh hotel. Crammed in the back seat between two burley gunmen, he says, “You know, Mercedes makes SVUs now…”

At the meeting Michael affirms that he will give Boris $750,000 to stop blowing up oil refineries. But when he gets on the phone with Boris’s bank information, he is informed that he, Michael, has “been burned,” before the line goes dead. As he is being beaten by his hosts, trying to explain, we get another voiceover: “Sometimes the truth hurts. In these situations I recommend lying.”

When Michael is being dragged through the lobby by the gunman he says he’s going to be sick. “You don’t understand! I’m going to be sick in the Mercedes! … Let me get to the bathroom.” He pulls the bathroom door hard into one of the thugs’ heads and we hear, “In a fight, you’ve got to be careful not to break the little bones in your hand on someone’s face. That’s why I like bathrooms—lots of hard surfaces,” as he slams the second thug into a urinal.

Escaping to the airport on a stolen motorbike, he passes out on the plane, only to wake up in a motel room in Miami, where his mother (Sharon Gless, Cagney & Lacey) lives. His ex-girlfriend (Gabrielle Anwar, Scent of a Woman) is in a chair, complaining that “you still have me as an emergency contact!”

Trying to check into a hotel, he finds that his credit cards don’t work, and his bank accounts have been frozen. End of setup.

From here on, holed up in Miami, Michael supports himself by solving problems for those who have the money using his covert skills, while trying to find out who has burned him and why. He is aided by ex-girlfriend Fiona and his friend Sam (Bruce Campbell, The Evil Dead), a washed-out military intelligence contact. And he has to deal with his nutty mother. There’s room for every kind of script, it’s PG rated, and decorated by Michael’s voiceovers (which have become celebrated, and the subject of a few <websites>). For instance, we learn that the quickest and cheapest way to bulletproof a car is to fill the door panels with phone books.

It’s seven seasons of USA Network witty fun. <Here> is a trailer that captures the spirit of this playful show. 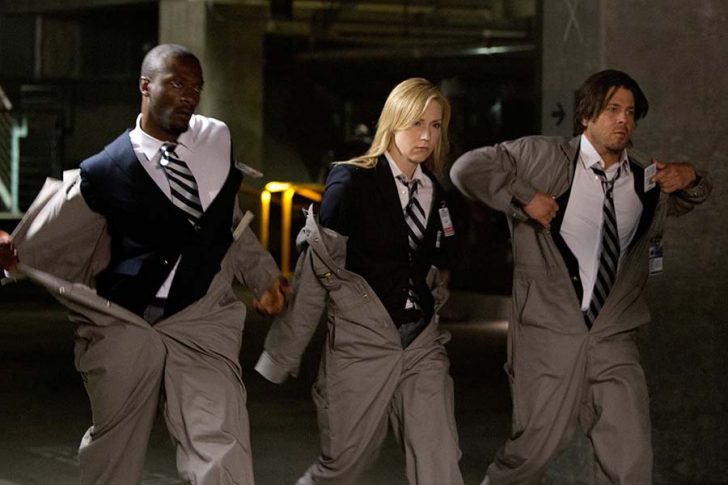 A crew of high-tech crooks for hire steal from wealthy criminals and corrupt businessmen. (IMDb.com)

Nathan Ford (Tim Hutton, A Nero Wolf Mystery) is a high-functioning alcoholic. He was an insurance investigator until his own company refused to pay for his eight-year-old son Sam Ford’s “experimental” cancer treatment. After Sam’s death, Nathan lost his job and his wife, and began drinking.

In the pilot, which takes place a couple of years after Sam’s death, Victor Dubenich hires Nate and a team of thieves to steal airplane designs from a company insured by Nate’s old company.

When Dubenich double-crosses and tries to kill them, Nate takes the team, enlists grifter Sophie Devereaux into the team and exacts his revenge on Dubenich, who used Sam’s memory to talk Nate into taking the job.

Nate and his charismatic team of thieves and grifters take us through a series of mission impossible scenarios with heart, humor, action, and some implausible tech. Here’ s Ion TV’s trailer at <YouTube>

The first episodes of installment four of FX’s brilliant <Fargo> have been uploaded to <Hulu, Fubo and other platforms.>

“In Kansas City, Missouri, two criminal syndicates have struck an uneasy peace. One Italian, one African-American. Together they control an alternate economy — that of exploitation, graft and drugs.”

Next time, rare birds worth the sighting: Northern Exposure, and Tim Hutton in A Nero Wolfe Mystery.