The Show Must Go On-Differently for Theatre of Dare

TOD takes on the 30th season and Covid-19 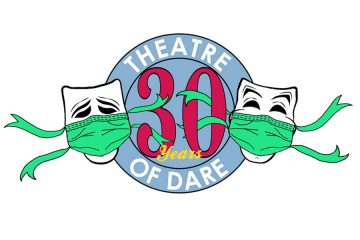 This year has brought unforeseen challenges to many; Theatre of Dare is no exception. When board members made the difficult decision to cancel the last show of the 29th season the thought of a new reality had not yet sunk in.

The Annual Membership Meeting held at the end of each season was a bit out of the ordinary as it was conducted through Facebook Live in early May due to Covid-19 restrictions. During the presentation a successful year was reported, plans for the future were mentioned and three new board members were announced as the terms of three other devoted members concluded.

Shortly after, the board met to elect officers, instate new members and prepare for a monumental season that would be anything but predictable.

Throughout the summer, monthly meetings were held at a safe distance, and board members continued to wrestle with the question of how live theater and Covid-19 would coincide. The productions originally set for the fall and winter of 2020 had to be postponed. Though determination existed for the season to advance, the government’s stipulations made it virtually impossible. So, virtual became the answer.

Theatre of Dare will kick off the season with a livestream reading of Mercury Radio Theatre’s Dracula scheduled for October 29, 30, and 31. Community response was positive, as new (masked) faces were present at auditions, both in person and through video submission.

A Christmas variety show is planned for mid-December, hoping to feature many in the community as auditionees are encouraged to bring their own prepared holiday pieces for spots in a livestream production. Audition information will be announced later this week through print, the website, and social media.

“Even if it looks different for the time being, we are working hard for Theatre of Dare to continue its involvement in the community and are hopeful to see some new faces by incorporating the virtual aspect,” says Stuart Parks, Theatre of Dare President.

Fundraising efforts will continue for ToD’s scholarship program. Normally, 50/50 raffles are held at performances, but for the time being donations will be solicited online for this important endeavor, as well as t-shirt sale, featuring the new 30th season logo.

As of now, plans are not solidified for the spring 2021 season but the Theatre of Dare board continues to search for new opportunities and make adjustments as the guidelines surrounding Covid-19 change.

To keep up with all the goings-on at Theatre of Dare, be sure to join our Facebook page, and sign up for our email list at theatreofdareobx.com.