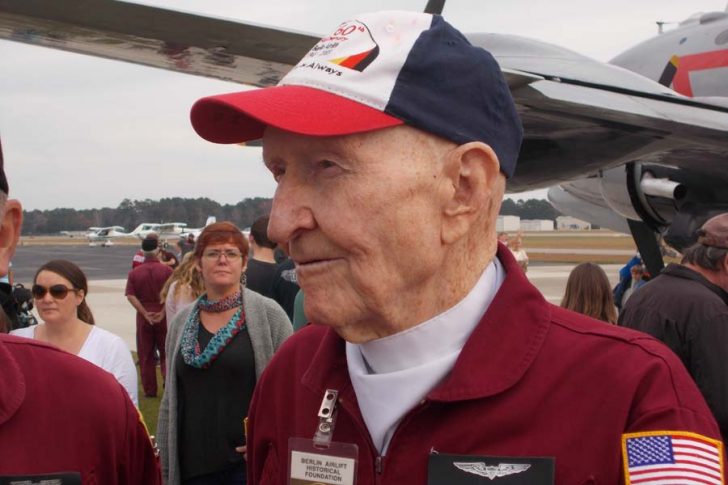 On Oct. 10, the First Flight Foundation posted this centennial birthday wish for the amazing Gail Halvorsen, who has graced the Outer Banks with his annual Candy Drop.

“Happy 100 years of an amazing life to an American hero, an American treasure, hope to so many during the Berlin Airlift, Col. Gail Halvorsen, Uncle Wiggly Wings, The Candy Bomber.”

To mark the occasion, we are republishing this profile of Halvorsen written by the Neel Keller for the Outer Banks Sentinel in 2015.

Born in Salt Lake City, Utah in 1920, Gail Halvorsen was the second of Basil and Luella Halvorsen’s three children. Growing up on the family’s farm in Garland, Halvorsen graduated from Bear River High School in Tremonton. “Working on our small farm,” Halvorsen recalled, “I was the only tractor my dad had. This was during the Depression, of course, so we didn’t have any discretionary money. We did have a lot of love, though, and plenty to eat. We had no idea we were ‘disadvantaged.’

“In the springtime we had to thin the sugar beets, and that was a hard job. You had to get down on your knees and use a hoe and leave a sugar beet every twelve inches, so they would get big when they grew up. I remember I was down in the dirt and I saw some airplanes fly over in the blue sky and I thought, ‘Wow! I’d like to be up there!'”

Explaining that early in 1941 — “before Pearl Harbor” — the government seemed to know there was “trouble on the horizon and we were going to need pilots,” Halvorsen said a non-college pilot training program was started. He had always been “good at math and science in high school” and qualified on the written exam for one of 10 flight school scholarships out of a total of 140 students. “I got my private pilot license in September 1941 and now I could fly.”

With the start of World War II, Halvorsen did not get his dream assignment flying a fighter plane and had to settle for serving as a transport pilot supplying bases in South America. He thought his active duty was over with V-E Day, but just a few years later, he learned his greatest adventure still lay ahead.

After the end of World War II, the allies partitioned and occupied sectors of Germany. The capital city of Berlin, located in the center of the Soviet-controlled eastern half, was also divided into four sectors. By 1948 tensions between the other allies and the Soviet Union flared and the Soviets imposed a blockade, cutting off all rail and road routes through Soviet-controlled territory.

After contemplating several dangerous options for breaking the blockade, the allies decided on another alternative: supply the city by air. And so began the Berlin Airlift. Air crews from the U.S., Britain, Australia, New Zealand and South Africa flew more than 200,000 flights in one year.

Halvorsen recalls one conversation with another pilot, who told him it was strange to be back in Germany helping the people who had not long ago been “the enemy.” Asking the pilot how it felt to help feed them, Halvorsen said the man “looked off into the distance for a moment,” then told him: “It’s a whole lot better to feed them than it is to kill them. I’m glad to be back.”

Halvorsen had his own struggle flying missions to help his former “enemies.” One of his “best school buddies” was shot down and killed by the Germans. Halvorsen felt responsible for his friend’s death — and confesses that, for a time, he was very angry. When he realized that the people he would be helping were “mostly women and children,” Halvorsen decided it “wasn’t their fault.” Soviet Union leader Joseph Stalin, he said, was America’s new enemy. Halvorsen was determined to help defeat him and volunteered for the Berlin Airlift.

One day, Halvorsen decided to hitch-hike into Berlin to use his home movie camera and film the planes flying in and out of the air base. It was one of those seemingly insignificant decisions that would have major consequences.

Noting a crowd of about 30 German children standing at the fence that ringed the air base, Halvorsen called out to them and reached into his pocket to find some sweets to offer the children. He knew they had not had any in years. He says that what struck him about the children was that they were “grateful, grateful to be alive and grateful to be free. And not one of them asked for candy. They didn’t even signal with their body language that they wanted anything. That’s what made me want to give them something.”

Finding that he had only two sticks of gum, Halvorsen handed them over. Then he watched the children break the sticks of gum into quarters to share with others. Those who did not get a piece of gum carefully tore the wrapper into small pieces and each took one, sniffing them to enjoy the aroma and then folding them up to take home to show their families.

Halvorsen told the children to return the next day, promising to drop more candy from his plane. The children immediately responded that, with a plane flying overhead every two minutes, they would never be able to recognize his. Then Halvorsen recalled a trick he had devised back in his earliest days as a pilot. He told the children to watch for the plane that wiggled its wings as it flew over. This led to the nickname “Uncle Wiggly Wings.” He later became known by his most famous moniker, the “Candy Bomber.”

As word of his daily candy drops spread and the crowds of children grew, Halvorsen was summoned by his commanding officer to explain what was going on. Fearing that he was about to be court-martialed, Halvorsen was commended instead and “Operation Little Vittles” became the air force’s official second mission over Berlin.

Hearing of the operation, the American public flooded the air force with donations. School children helped by attaching the candies to parachutes. By the end of the airlift, 25 bomber crews had dropped 23 tons of chocolate, chewing gum and other candies over West Berlin.

“I always tell the kids,” Halvorsen reflected, “that the little decisions you make put your footsteps on the path that determines where you end up — for good or ill. And that little decision I made — two sticks of gum — turned into 23 tons.”