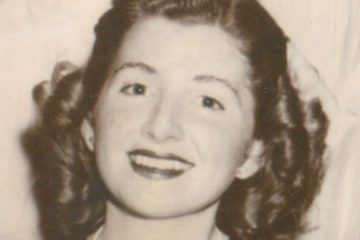 Elizabeth Jane Midyette Whitaker, age 96, passed away peacefully on Saturday, October 10, 2020.  A native of Camden County, she was born September 2, 1924 to the late Thomas Cobb Midyette and Bessie Mabel Lee Norton Midyette.   She graduated from Elizabeth City High School May 23, 1941 and was employed as the first civil service switchboard operator at the Elizabeth City Air Station and Blimp Base from 1944 to 1949.  She married the late Airman First Class, Wesley James Whitaker on June 26, 1948.   A lifelong member of Camden United Methodist Church, Elizabeth was one of the first to get married in the church, was a very active member and sang in the choir.  She was devoted to her family and was cherished by family and friends.

A funeral service will be held at 11:00 am Friday, October 16, 2020 at Camden United Methodist Church officiated by the Rev. Marc O’Neal.  Burial will follow at New Hollywood Cemetery.  Memorial donations may be made to the Camden United Methodist Church, 197 South Highway 343, Camden, NC  27921.  Twiford Funeral Home, 405 East Church Street, Elizabeth City, NC is serving the Whitaker family. Online memorial condolences may be sent to the family at www.TwifordFH.com.