Beach wreckage revives the mystery of the Metropolis 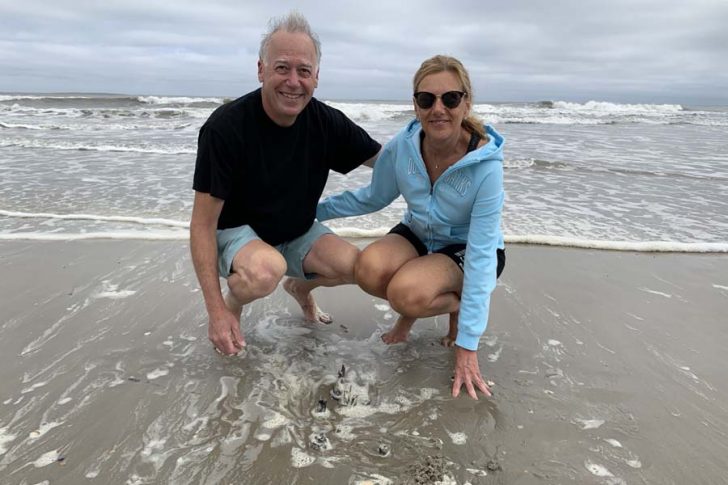 There was something about the little nubs of wood sticking out of the sand at low tide that attracted Suzanne Heisman’s attention as she and her husband, Kim, walked along the beach in Corolla in late September.

“They didn’t look like anything that was natural to the ocean. They were at an odd angle and the materials were not natural to the beach,” she said. “I gave it a yank to see if it would move, and I realized it was firmly imbedded.”

As she and Kim looked around, they could see big pieces of metal just above the surface of the sand. “We kind of dug around with a clam shell of all things, and then we got a toy shovel and cleared away more of the sand, being very careful,” Kim said. “When we uncovered it, we realized it wasn’t just some random wood. That it was a shipwreck.”

That shipwreck has been known to North Carolina marine archaeologists for about a decade, but its identity is still unclear. But it is possible the wreckage is from the Metropolis, a ship that sank just off the coast in 1878 with a major loss of life — a highly publicized tragedy that led to reform and fuller funding of the Lifesaving Service.

“It is in the same area as the old ‘Horse-Head wreck’ that according to local lore, was the Metropolis. But at this point, the identity is speculative,” said Nathan Henry, Assistant State Archeologist, Underwater Archaeology Branch. “It is in the right place for it to be part of the Metropolis.”

No one knows just how many shipwrecks have come to rest on Outer Banks beaches. Some, like the O’Keefe site about a half mile north of what the Heismans found, are an almost permanent part of the beach. Others disappear, then reappear when storms and tides are right.

The North Carolina Office of State Archeology first learned of this shipwreck in 2010, but it quickly disappeared, giving archeologists little time to examine the site.

A positive identification of the wreck is a long way off. Dr. Nathan Richards, Director of Marine Studies at ECU, points out that identifying a shipwreck on the beach is sometimes possible. But it takes considerable time and research.

“Because we’re dealing with a Nineteenth Century vessel, we tend to have really good historical records, and we tend to have very good marine insurance records,” he said. “Marine insurance is critical because in this period of time…they were dictating what the rules were for building ships…Those rules might say, ‘a ship of 300 tons might have frames of this dimension spaced out in this other dimension. It must use iron fasteners.’”

If the wreck is the Metropolis, it would be historically significant.

On Jan. 31, 1878, the Metropolis was stranded on a sandbar just 100 yards from shore. A fierce winter storm had just passed, but the waves remained, beating the ship from side to side, spilling cargo and passengers. When the horror ended, 85 of the 248 passengers on the ship perished.

But the sinking of the Metropolis is only a part of the story.

Two months earlier, on Nov. 24, 1877, the USS Huron struck a sandbar just 200 yards off the Nags Head beach. The ship, a steel-hulled steamship launched just two years earlier, signaled in vain for help as she was battered by the waves. Of the crew of 132, only 34 survived.

The sinking of the two ships within months of one another, highlighted the problems with the US Lifesaving Service, the predecessor to the US Coast Guard, as documented in a number of sources, including the book, A Heavy Sea Running–The Formation of the Life-Saving Service 1846-1878. The service was underfunded and staffed with poorly trained crews who were often led by political appointees.

On the Outer Banks, employment in the Lifesaving Service was a seasonal occupation, and when the Huron ran aground, the Nags Head station was closed. The foundering ship would have been clearly visible from the station, but the crew of the Huron was probably unaware that the station was closed for the season when they signaled for help.

Sinking four miles south of the Currituck Beach Lighthouse where the Jones Hill Lifesaving Station was located, the Metropolis highlighted how poorly trained the Lifesaving Service was.

The ship ran aground at 6:00 a.m. The lifesaving crew did not arrive at the scene until noon, believing, according to reports at the time, that no one could survive in conditions that harsh.

When they did make it to the site, the crew’s captain failed to bring adequate supplies for a rescue. Typically at that time, a harpoon would be shot out to the ship, fastened to it and a breeches buoy, a harness attached to the rope, would bring passengers ashore on the rope.

The first attempt missed the vessel. The second attempt was on the mark, but ship listed suddenly, snapping the line. A third harpoon was sent to the Metropolis, but it too missed its mark. There was no fourth attempt. The crew’s captain had failed to bring enough gun powder.

Charged with “inexcusable neglect,” the station keeper was relieved of command.

Newspapers of the day highlighted the tragedies and public opinion forced Congress to act —and it acted quickly. As the fiscal year ended in June 1878, the Lifesaving Service was fully funded. Money was available to build new stations, train personnel and keep the stations staffed all year round.