With a little help from his friends 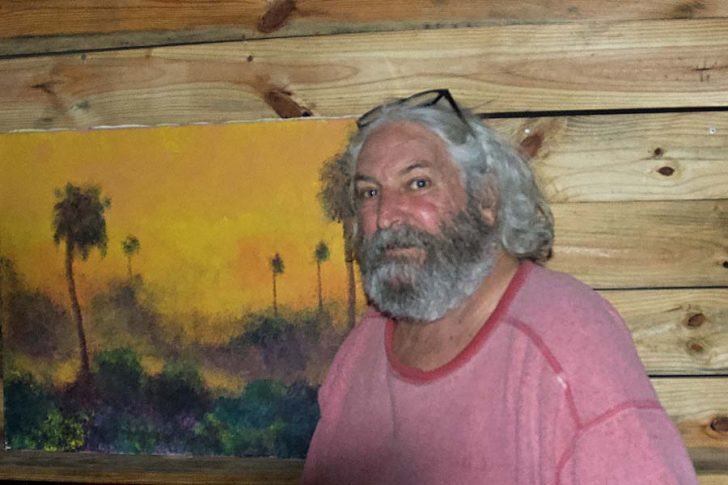 Jerry Pontes tries to save a home and business 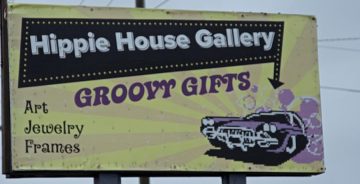 Jerry Pontes is homeless and his business, the Hippie House Gallery in Kill Devil Hills, is closed.

He had been living there since 1985 — the year he gave up commercial fishing; the year his mother offered to let him and his family live there if he paid the mortgage. “I raised my family here,” Pontes said.

Since 1991, there has almost always been a business on the ground floor. Pontes had an antique shop at one point. After a painful divorce, he began painting and opened the Hippie House a few years ago.

There are two small apartments on the second floor and since he moved in, a third-floor apartment. “At some point somebody made it a living space. When I got here in ’85 it was an apartment. I rented it out and I’ve done that for thirty-five years,” he said.

It was the third-floor apartment that led to his current predicament. There was a grease fire in the apartment earlier this month. The tenant, believing it was electrical, told the town that she wanted the unit inspected.

On Friday, Oct. 9 the unit was inspected. The town determined that the third-floor apartment had never been permitted, and that it had originally been platted as an attic. Concerned that without a permit, there was no way to determine if the wiring to the third floor was safe, or if the plumbing in the apartment was in compliance with state building codes, the town sealed the door and ordered that no one could live there.

Further inspection showed additional problems with the electrical system, as well as a number of additions to the property and plumbing work that had never been permitted. The electrical issue, though, was what was most concerning, according to Jordan Blythe, Code Enforcement Officer for Kill Devil Hills. “That was definitely first and foremost,” he said.

The town told Pontes that if an electrician was willing to say the wiring was safe, power could continue to be provided to the building. If not, Dominion Power would be notified and could take his meter, cutting off his power.

“We have a responsibility to notify Dominion,” Blythe explained. “There were time frames for him to try and have an electrician, and unfortunately the electricians were not comfortable with what was there, which is a red flag.  And Dominion was notified of that.”

“It’s not a fun thing for me to break to anybody,” he added.

On Wednesday, Oct. 14, Dominion Power removed his meter. “It was traumatic. It’s very traumatic, and I couldn’t believe it,” Pontes said.

His friends rallied to him. Although it’s temporary, his friends made sure he has had a roof over his head. A GoFundMe page was started for him, and local musician Chris Toolan posted about Pontes’ plight on his Facebook Page, writing, “If you know Jerry, you know how beautiful a soul he is to all he meets.”

“I’ll be honest with you, I’m a very private person,” Pontes said, referring to the attention from the Outer Banks community. “It blew my mind, actually. Once or twice, I kind of broke down. I was so humbled and amazed and just astounded.”

There is still a long way to go and significant concerns about complying with the Notice of Violation issued on October 13. The language of the notice indicates fines may be levied fairly quickly for non-compliance.

“If you fail to acquire a building permit within 15 days, you may be assessed a graduated penalty starting at $50 per day…Each day’s continuing violation shall be a separate and distinct offense…” the Notice of Violation reads.

That means 15 calendar days, not 15 business days, according to the town’s Assistant Planning Director Cameron Ray. However, an electrician has already agreed to take on the work that has to be done to ensure the building can safely handle power

Ray pointed out in an email response to questions about the Notice of Violation that Kill Devil Hills takes into consideration circumstances that are beyond the control of a property or homeowner.

“It is often that the department may grant an extension of time if the owner is working towards compliance and acquiring a permit, but is being held up by a contractor, surveyor, engineer, etc. that is busy,” he wrote.

Specifically referring to the situation with the Pontes property, he noted that, “The Town would like to reiterate at this time Mr. Pontes has not been issued a civil citation and appears to be working towards a permit to comply.”

That is consistent with the view Pontes is taking. “I’ve got to fix it all in a timely manner. And I just hope, I’ll try and get the money. The money will come from somewhere,” he said.

The irony is that the money probably would be there if he could reopen his shop. The Hippy House Gallery has always been an eclectic blend of Pontes’ art, local jewelry, incense —although no pipes, hookahs or anything drug related. It’s a place where musicians will stop by to jam for a bit and parents can bring their children to buy a ukulele.

“We were having a banner year at forty percent growth,” he said. “I’m retired. Some people go fishing or they play golf. I opened a little mom and pop shop.”

Looking around his shop, with everything boxed up and ready to move in case he can never reopen, Pontes takes a philosophical view of what has happened.

“I can work through this, and if we can just work together, we can get to where we want to be for me to grow and change,” he said. “And one thing I’ve learned in life is that you’re going to have that.”