WHAT TO WATCH ON TV
Stream On: What’s Halloween without Boris Karloff? 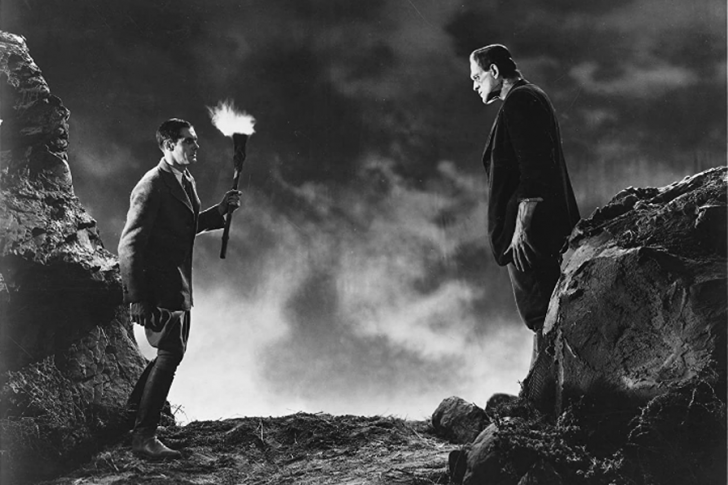 Something deep in the human psyche is fascinated by Mary Shelley’s 1818 story, Frankenstein; Or, The Modern Prometheus [which can be read or downloaded here]. The Old Testament avers that when Adam and Eve ate the fruit of the tree of knowledge of good and evil, they became “as gods.” So when they were cast out of the Garden of Eden, what next? If we are now as gods, should we not create life ourselves? What could go wrong?

A simple search of “Frankenstein” on a [Roku] [media player] returns dozens of film and TV treatments, from 1910 until [2016 and counting], and although Kenneth Branagh’s 1994 treatment may be closest to the book, James Whale’s 1930’s films Frankenstein and Bride of Frankenstein make a frighteningly satisfying double creature-feature.

“Now I know what it feels like to be God,” exults Henry Frankenstein when his creation draws its first breath. Director James Whale and busy but as yet unsung character actor William Pratt (stage name Boris Karloff) transcended Mary Shelley’s story in 1931. Working from Peggy Webling’s conceptual 1927 play, Whale cobbled together a thing of beauty, unlike the horrible creature cobbled together by the titular mad doctor Henry Frankenstein.

Shot in beautiful black and white, which in [the more pacific scenes] recalls the bright engravings of Victoriana, but also embodies the [Gothic corners of the human id], Frankenstein (referring to the doctor) is the story of Henry Frankenstein who, through a mixture of scientific obsession and madness, reanimates a corpse sewn together from a collection of cadavers, and the retribution the universe brings for daring to play God.

The money shot comes with the [reveal of the creature], played by Karloff (who received the billing of “?”). Monstrously large, he is gentle and calm until being abused by an ignorant assistant and replying in kind.

Frankenstein has continued to receive acclaim from critics since it opened and is widely regarded as one of the best films of 1931, as well as one of the greatest movies of all time. It holds a 100% “Fresh” rating on the review aggregate website [Rotten Tomatoes]. Here is a [trailer]. (These trailers don’t reflect the beautiful condition of the restored movies.) 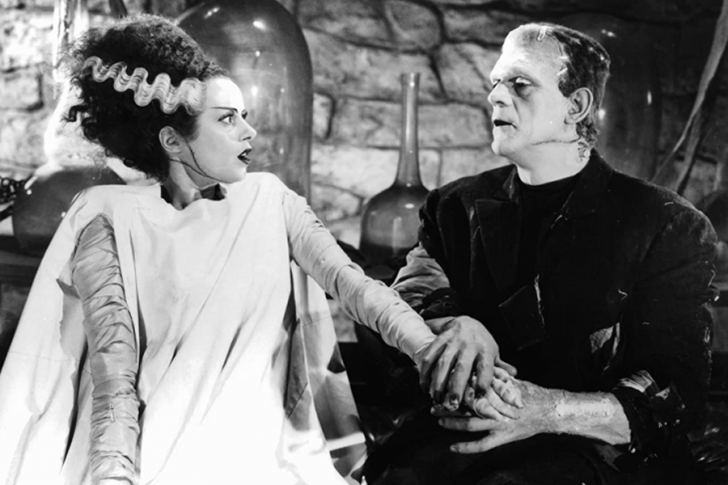 By the time Bride of Frankenstein came out, Boris Karloff had become such a big star that his name now preceded the title in the opening credits, and “The Monster’s Mate” was now credited to “?” She was played by Elsa Lanchester, a unique beauty who also portrayed Mary Shelley in the opening scenes.

(An uncredited John Carradine, who turned down the part of the creature in 1931 as beneath him, turns up in one scene as a lost hunter.)

1816—Lord Byron, Percy Bysshe Shelley and his young wife Mary are in a salon remarking on the thunderstorm without, when the subject comes around to Mary’s unpublished manuscript, about “a monster created from cadavers out of rifled graves!

“No wonder [inaudible] refuses to publish the book. He says his reading public would be too shocked!”

Mary looks up from her crocheting and says sweetly, “It will be published, I think!

“The publishers did not see that my purpose was to write a moral lesson, of the punishment that befell a mortal man who dared to emulate God.”

Byron waxes on about Mary’s novel, and we see a recap of scenes from the original 1931 film, Shelley remarking, “I do think it a shame, Mary, to end your story quite so suddenly!”

“That wasn’t the end at all! Would you like to hear what happened after that?”

And we’re off!—back at the burning windmill from the final scenes of the previous movie, while the second plot point of Mary’s story plays itself out. Long story short, the creature has not died; he is resurrected, escapes, learns to speak (from a saintly blind cottage dweller who plays Ave Maria on his violin), and returns to Frankenstein, who has made a friend of his own (an insane, not merely mad, scientist), demanding he create a mate for him. (In a callback to the Garden of Eden, the violinist teaches the creature, “There is good, and there is bad.”)

Hilarity ensues, and by hilarity I mean suspense, terror, and enough comedy to keep everybody entertained, and the [unforgettable debut] of the female creature. As with Godfather II, some regard Bride of Frankenstein to be superior to its antecedent. I think the two make an inseparable pair. Here is a [trailer].

Next time, Back to the future of TV with Ernie Kovacs and Soupy Sales.