‘The right place at the right time’ 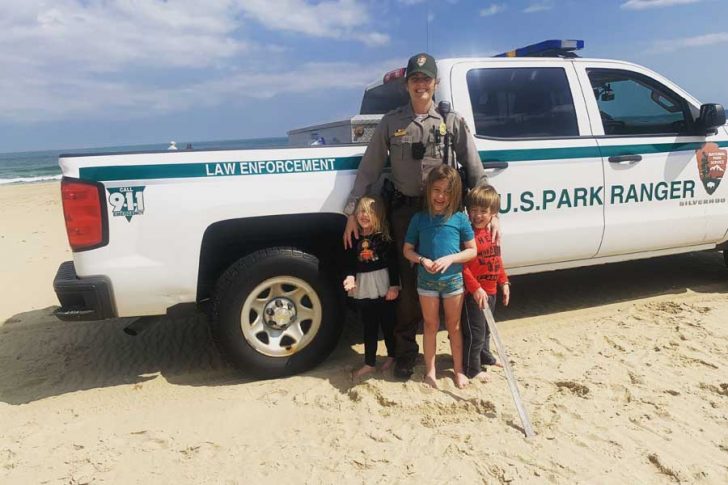 For U.S. Park Ranger Valerie Streiff, responding quickly to emergencies has always been second nature. Now stationed out of the Bodie Island district of the Cape Hatteras National Seashore, Streiff was formally recognized several years ago as a U.S. Park Police officer in Maryland for saving the lives of two individuals in separate motor vehicle accidents.

Most recently, on Oct. 18, Streiff again acted quickly to save lives. This time, it was in response to a call regarding two swimmers who were in distress at Ramp 4 near Bodie Island Lighthouse. On that particular afternoon, the risk of rip currents was high, and a small craft advisory had been issued due to high surf.

Streiff and her co-worker, U.S. Park Ranger Brian Waters, responded to the scene only to learn over the emergency radio that ocean rescue personnel were not in route, and it was uncertain when a U.S. Coast Guard vessel out of Oregon Inlet would reach the swimmers.

“There were two people in the water,” Streiff recounted, and they were about 60 yards offshore. “You could see their heads bobbing up and down, and I could see they were in a rip current. They weren’t making any progress and were getting further out.”

Streiff, 38, quickly made the decision to initiate a rescue.

A certified Emergency Medical Technician and a former lifeguard of many years, Streiff took off her uniform so she could swim more easily with just a T-shirt and pants. She dropped her duty gear in her truck, put on a life jacket and grabbed a boat floatation cushion before entering the water.

Due to the rough ocean conditions, it was difficult to keep her eyes on the victims, so Park Ranger Waters directed Streiff from the beach until she reached them.  “He was a big help,” Streiff said of Waters. “Just having someone on shore.”

Once reaching the swimmers – a father and a son about 10 years old – Streiff gave them the floatation cushion to hold on to and swam them out of the rip current. Of the father, she noted, “He was trying to obviously keep his son above water, and was just exhausted.”

Because of her previous training, and having a life jacket and floatation, Streiff said she felt she could execute the rescue.

“It was intense, but I felt confident that I could bring them out safely…because there was no one to help them…I couldn’t just stand there on shore.”

As for the victims, they both came up and hugged Streiff after the rescue, thanking her for saving their lives.

That wasn’t the first time Streiff acted quickly to save lives. While working in Maryland as a U.S. Park Police officer, her quick response to two automobile accidents also resulted in lives saved.

The first occurred in July 2018 on the Baltimore-Washington Parkway. During that incident, the victim drove into a ravine and the a-frame of the car went into her femoral artery. Responding quickly before Emergency Medical Services arrived, Streiff applied the wound dressing, Quikclot, to the injury and put a tourniquet on to stop the bleeding.

Streiff responded to a second accident in April 2019. This time, the victim had been ejected from the vehicle.

“Somehow his neck was slashed ear to ear,” Streiff recalled of the lacerations. Using Quikclot again, Streiff applied pressure and also performed a life-saving needle decompression on scene to treat the victim’s collapsed lung. “He was able to breathe again,” she says of the procedure she performed before EMS got on scene and he was flown to a shock trauma center.

Streiff, who lives in Nags Head with her husband Steve; five-year-old twins, Lily and Edward; and seven-year-old daughter Sarah, was recognized by the U.S. Park Police with a Lifesaving Award for those two heroic actions. She says she’s learned to be quick on her feet with her training and background.

“I just feel like I was at the right place at the right time,” she added. “If I’m able to save someone’s life, that’s what I am going to do.”