WHAT TO WATCH ON TV
Stream On: Back to the future of TV with Ernie Kovacs and Soupy Sales 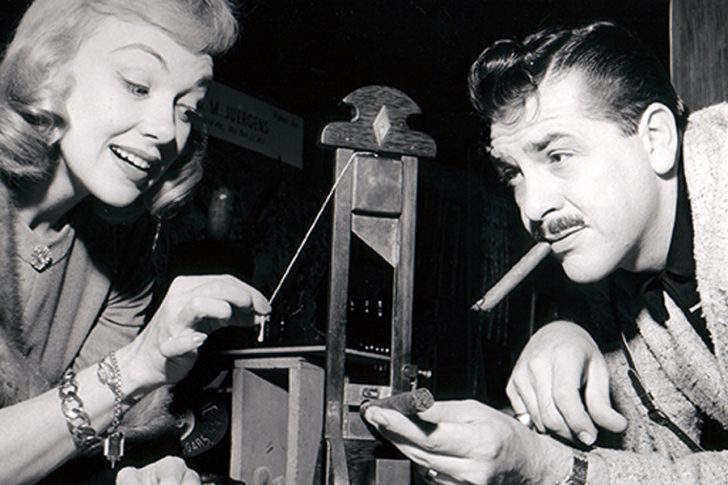 TV innovator Ernie Kovacs went from auditioning for his first TV gig in 1950 wearing a barrel to becoming “more than another wide-eyed, self-ingratiating clown. He was television’s first significant video artist” [Milwaukee Journal]. And Soupy Sales began a radio career in WKRC (not WKRP) in Cincinnati in 1950, and becoming one of Howard Stern’s childhood heroes, and another legend in freeform TV, whose myriad shows are still broadcast on the [RetroTV] over-the-air channel.

Ernie Kovacs’ gravestone in Forest Lawn cemetery reads “Nothing in Moderation.” He lived in a time when artists, eccentrics and free spirits looked like everyone else; his remarkable spirit went into TV and movie cameras. The movies persist, but the TV of the ’50’s was largely live, and like a Buddhist sand mandala vanished with time. Luckily, archivists had developed the Kinescope method of filming live TV, by pointing a film camera that was synchronized to the scanning rate of a television monitor at a set during broadcasts.

And TV was what Ernie Kovacs was all about. He appeared as a character actor in maybe a dozen movies, but it’s his TV broadcasts that he is known for—and revered—by such as Johnny Carson, David Letterman, the writers and casts of Rowan and Martin’s Laugh-In, Saturday Night Live, and Monty Python’s Flying Circus, Jim Henson, Chevy Chase, Conan O’Brien and [Pee-wee’s Playhouse’s] Paul Reubens, among others.

Ernie was the master of live, improvisational and loosely scripted TV comedy, who pushed the technology envelope of the day in the service of his gags. For instance, he bolted a set to a platform that was tilted with a camera pointed at it, also tilted. When he sat at the table and prepared to eat lunch, gravity did much of his comedic work for him, [thus]. But his skits were also set to exotic and strange music, such as [a series of blackout sketches] accompanied by the German-language recording of “Mack the Knife” from the Threepenny Opera.  His most famous recurring sketch was “The Nairobi Trio” in which three “apes” in derbies and overcoats, antagonistic to one another, pantomimed Robert Maxwell’s “Solfeggio.” [Here’s one example]; there were many variations, including one in which the apes were sent into space. The female ape at the piano was generally Kovacs’ wife Edie Adams or another actress; the conductor (with cigar, of course) was Ernie, and a string of his friends, including Frank Sinatra and Jack Lemmon, all uncredited, wielded the drumsticks.

Edie Adams had a more succesful film career than Ernie, but she was his soulmate, down for anything he dreamed up, and insanely talented. [Here] she portrays Marilyn Monroe singing “The Ballad of Davy Crockett.”

Bits and pieces of Ernie’s various shows are available here and there; all are well worth your while. I’ll leave you with this short piece, “[Kitchen Symphony].” 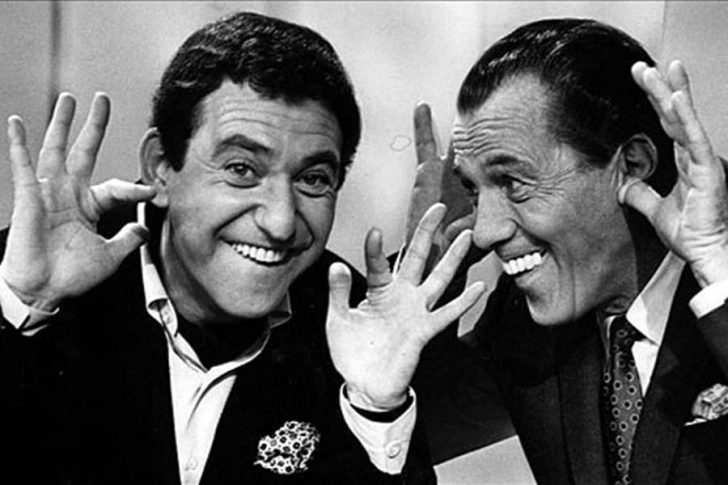 Meanwhile, in 1953, Milton Supman (stage name Soupy Sales) was hosting Lunch with Soupy Sales on WXYZ-TV in Detroit. He would often take a studio camera to the lawn of the Detroit public library nearby to rap with students walking to and from school. In 1955 a Saturday version of his show was broadcast on ABC. He would perform bad jokes and skits with puppets, including Willy the Worm, appear in costume and exchange many pies to the face with his crew.

In 1960, Soupy moved to the ABC-TV studios in Los Angeles. They canceled his show in 1961 but it continued as a local program on KABC-TV until 1962. The show went back on the ABC Network as a late-night fill-in for The Steve Allen show but was canceled again after 3 months. Soupy was now well-known enough to become The Tonight Show guest host between the residencies of Jack Paar and Johnny Carson.

In 1964 Soupy took the job for which he is most remembered, at WNEW-TV in New York City. Between the usual hi-jinx, he hosted musical guests such as Frank Sinatra, Judy Garland, Sammy Davis Jr., the Supremes, and the Temptations. Frank Nastasi operated the puppets and played the occasional doorway interloper with whom Soupy interacted, including White Fang, “the biggest and meanest dog in the USA,” Black Tooth, “the biggest and sweetest dog in the USA,” Pookie the hipster Lion and Hippy the Hippo. (Nastasi would wear white or black fur gloves for the dogs, showing only his gesticulating hands.) Here’s [eight minutes of Soupy and Pookie], who would open by pantomiming Clark Terry’s “Mumbles” before trading gags with Soupy, such as “I saw King Tut’s mummy in a museum, and a sign said all who looked at it would have bad luck, especially if they were lions! And it came true!”

Pookie: “Do you know any other lions who work on your show?”

Some friends were on the water in Charleston recently and saw a commotion involving a police boat and a fire boat…but the equipment bore the labels “Kildare County.” It turns out they were filming the second season of Netflix’s [Outer Banks]. Stay tuned!