At her last meeting, tributes to Bea Basnight 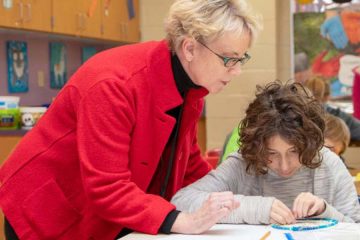 In tearful and heartfelt remarks, Dare County Board of Education Chair Bea Basnight reflected on her nearly five decades of service to Dare County Schools — 35 as a teacher at Manteo Elementary School and 12 as a board of education member— during the board’s Nov. 10 meeting.

In equally emotional tributes, others also took the opportunity to recognize the imprint Basnight has made on the district and to thank her for her service. The meeting marked the final time Basnight would preside over the board before her term expires at the end of this month.

The widely respected Basnight, a Democrat, lost the District 1 seat on Nov. 3 to Republican challenger Carl Woody II. It was her first race since state legislation mandated that Dare Board of Election campaigns be operated as partisan elections — and in solidly red Dare County, she lost by about 900 votes.

“It was a good run,” said an emotional Basnight of her time with Dare County Schools. “In my career as a teacher and on the board, students have always come first. I want to say to the Dare County teachers who may be listening and those of you who are here – you are the best.”

Addressing her fellow board members, Basnight asserted, “You entrusted me to lead you, but we have always been a team…I’m going to be your biggest cheerleader.”

Over the years, Basnight was instrumental in efforts to see the new construction and expansion of Manteo Elementary School and is credited during her tenure for strengthening the sometimes fractious relationship between the school board and the Dare County Board of Commissioners.

But Basnight said one of her proudest accomplishments was leading the board in the superintendent search that resulted in the hiring of Dr. John Farrelly. “We got it right,” she said. “Thank you Dr. Farrelly, for your leadership, your attention to detail, your compassion for every student, for every family and every employee of Dare County Schools.”

Farrelly presented Basnight with a plaque to honor her years of service, asserting that in his 28 years of education, he’s never seen a more dedicated board of education member than Basnight.

“You can tell by the tears and the tremble in your voice how much you care,” Farrelly said during the presentation. “I’ve been one of the lucky few of the thousands of students, employees, and community members who’ve been impacted by you, Ms. Basnight.”

He continued, “As a teacher, you’ve reached hundreds and thousands of students, as a Board of Education member, you’ve reached a lot of adults and you’ve reached an entire community…Morning, noon, night, 24-7. When you didn’t have to, every single time you answered the call and your dedication has been unbelievable.”

Dare County Board of Commissioners Chairman Bob Woodard also praised Basnight for her leadership and her friendship, pointing to the cooperative atmosphere the two boards have cultivated over the last eight years as evidence. “The relationship that we’ve had has just been incredible,” said Woodard.

Fellow board members also shared kind words about the outgoing chair. Frank Hester told Basnight that he appreciated her consistency in overseeing the board. “You allow people to voice their opinion and you’re quick to listen, and slow to speak,” he said.  For her part, Mary Ellon Ballance admired Basnight’s “grace and poise, and how you bring people together and lead.”

Board Attorney Brian Shaw also commended Basnight, acknowledging that the relationship between the school board and commissioners was at times contentious before her stint as chair.

“I credit your leadership for bringing those two public bodies together and working together,” he noted.  “Every conversation we have had has been about the kids and doing the right thing.”

In closing, after the accolades and goodbyes, Basnight did acknowledge an upside to the end of her tenure with Dare County Schools.

“I’ll thank my little eight-year-old grandson, who said, ‘Bebe, now you’ll be home all day for me.’ So that’s the silver lining for me.”