WHAT TO WATCH ON TV
Stream On: Up from the skies—Alien occupations through the years 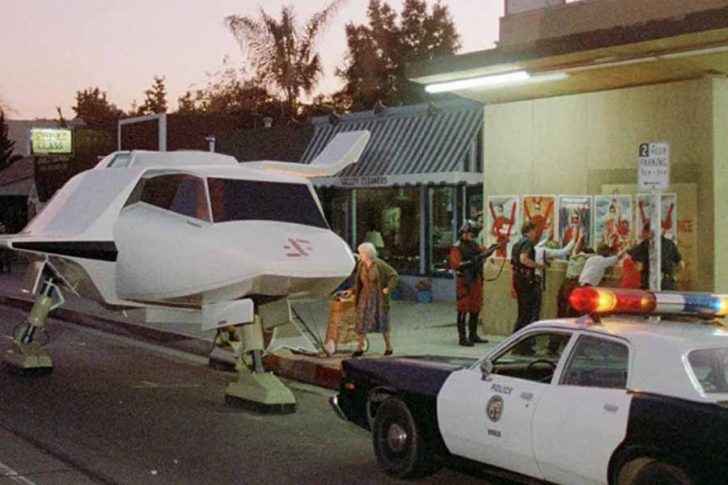 “Inspired by Sinclair Lewis’ 1935 antifascist novel It Can’t Happen Here, director-producer Kenneth Johnson wrote an adaptation titled Storm Warnings in 1982. The script was presented to NBC for production as a TV miniseries, but NBC executives rejected the initial version, claiming it was too ‘cerebral’ for the average American viewer. To make the script more marketable, the American fascists were recast as man-eating extraterrestrials in order to capitalize on the popularity of franchises such as Star Wars” (Wikipedia). And in 2011, writer Robert Rodat and director-producer Steven Spielberg (both, Saving Private Ryan) launched an epic series about an overt alien occupation.

After introductory stills of the main and supporting cast of V, a title appears in white on a black screen: “to the heroism of the resistance fighters –past present and future– this work is respectfully dedicated” before we meet the cast: a TV news cameraman and his producer, a biologist, an archaeologist, a thief at work in Los Angeles. He sees a report on a TV (that he is considering stealing) giant flying saucers hovering over major world cities. A teenaged girl on a paper route is struck by a car as her parents scream at her to get home. She’s okay, but the neighbors gather around, including a Holocaust survivor, to gape at one of the huge saucers; someone says, “It’s fantastic!”

Humanity waits, while more than 50 saucers hover motionless above the earth. Finally voice transmissions are heard, in the respective languages of the various cities, “Citizens of the planet Earth: We bring you greetings and we come in peace,” and a request to meet with the Secretary General of the UN. Under the gaze of the world’s press, including our cameraman, a smaller craft emerges from the New York saucer and lands on the roof of the UN. A voice from within addresses the Secretary General: “Do not be afraid. Please come up the ramp.”

Shortly the Secretary General reemerges and introduces the aliens’ supreme commander, a humanoid, just like us, who addresses the fascinated nations. (He’s played by Richard Herd, “Mr. Wilhelm” on Seinfeld.) He says environmental conditions on his own planet have become untenable and they have come to seek help from earth. As a representative team and the pool of reporters boards the shuttle, on its way to inspect the saucer, the son of the Holocaust survivor, watching with his family on TV says, “You see there, they’re shaking hands! It’s great! Huh, father?” Father doesn’t answer; he looks skeptical.

At the dedication of a refinery devoted to the visitors’ work, a high-school band plays the Star Wars theme song as a hundred rank and file visitors report for work. While teenaged girls exult over some of the personable alien workers, and a human food truck waitress strikes up a friendship with a timid alien worker who saves the life of a human coworker during an accident (Robert Englund, A Nightmare on Elm Street), there are flies in the ointment.

A group of scientists are exposed in a conspiracy against the visitors, to almost universal scorn. On TV, all scientists are requested to register with local authorities, as the Holocaust survivor watches in horror. Our cameraman and his producer notice an anomaly on a tape they shot of the dissenting scientists.

The scientists are scapegoated because they are most likely to discover the visitors’ nefarious plans, which are learned from a fifth column of dissident visitors, before an organized resistance emerges. But is it too late?

[Here] is a contemporary trailer 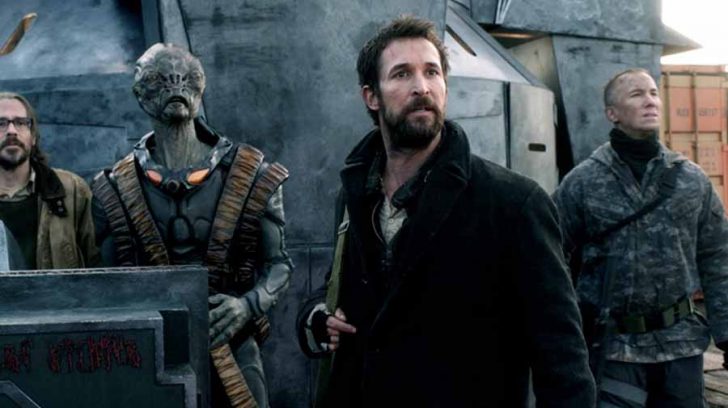 Cochise (center left) commands the Volm forces, which are fighting alongside the humans against the Espheni military occupation of earth in Falling Skies. (IMDb.com)

This Dreamworks TV series drops us right into an alien invasion. These visitors didn’t bother to put on a nice face (nor were they humanoids); they neutralized the world’s power grid, defeated earth’s militaries and killed much of the population by destroying major cities and capitals outright.

Noah Wyle (ER) plays Tom Mason, a former Boston University history professor who now leads the eastern American resistance against the Espheni invaders. His wife was killed in the invasion, but he has three sons. His adolescent boy was captured by the Espheni, who implanted a device on his spine allowing them to control him. Tom’s two adult sons fight alongside him.

The aliens include two species, the mysterious Espheni overlords, and “skitters,” six-legged brown creatures that control mechanical attack drones, called “mechs.” Things pick up for the humans when another race of aliens, refugees from the Espheni, join in the fight against their shared oppressors. They have considerable technology, but had already lost their planet to the Espheni. The Volm are led on Earth by Cochise (so named by Tom Mason), and are fighting alongside the earthlings largely against the wishes of their skeptical leaders, among them Cochise’s father.

At one point a human/alien hybrid is born, quickly growing into a beautiful young lady who divides the loyalties of everyone involved by asserting her “royal” authority.

Next time, movies from the stories of the greatest espionage author you never heard of.