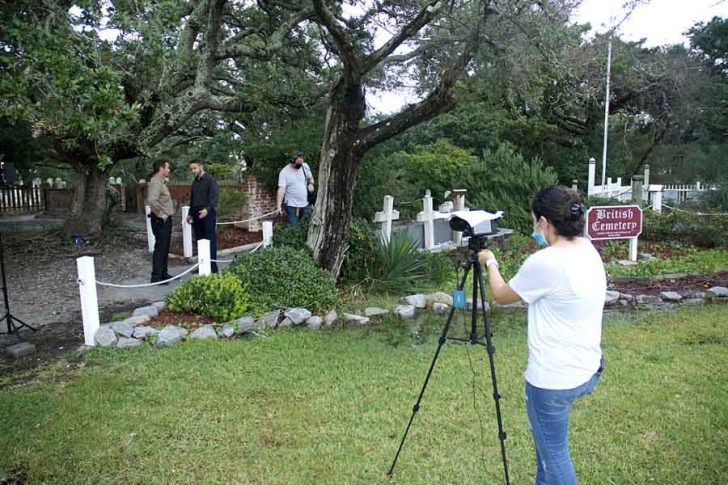 The island is home to a new horror film

Amidst the beauty of Ocracoke a horror lurks. The residents, complicit if not always willing participants in the terror that stalks the island, have entered an unholy alliance, pitting their dreams of financial independence against an unspeakable evil.

With on-location filming for Dave Dean’s horror movie Ocracoke beginning last week, the story of Thomas White and his profane hold upon the village has begun to emerge. White is a 120-year-old vampire masquerading as young entrepreneur who has created a massive trust fund for all of the residents of the village. All they have to do, in return, is turn a blind eye to the occasional tourist who disappears.

Ocracoke is by any standards an independent, low-budget film. Dean, who wrote the script and is the producer, is hoping to fund the feature-length movie through a Kickstarter campaign. The cast, all of whom are from North Carolina, are not taking a salary, doing what they love to do after a forced hiatus because of the COVID-19 pandemic.

“We found that there’s all these actors who were literally sitting around itching to act, and they didn’t have any gigs,” Dean said. “So we just said, ‘Alright, we don’t have any money but let’s do this.”

He was also able to get some remarkable behind-the-scenes talent. Bea Noguera, has directed a couple of short horror films, but wanted to move into feature-length films. Her husband Matt Klein is boom operator, sound man and co-director. Makeup artist Jennifer Hall has worked on a number of major television productions.

“All these people were just sitting there, and they’re all are professionals. They all want to work. They want to create art,” Dean said.

At its most basic level, Ocracoke is a vampire movie, but it is a movie that poses some disturbing questions about what people will tolerate when they feel they are benefitting.

“I wouldn’t say he’s evil,” he said. “His rationale is he is doing something that is beneficial for a small-town community. They’re providing him with a service, that is trying to cover up everything so he doesn’t get discovered and found out to be a vampire. So there are a lot of people in this small town that are kind of in tune with everything that’s going on, but they turn a blind eye, because everything is progressing the way it needs to for them.”

Into the mix comes Detective Peter McAllister (Kellen Cuttance), whose goal is to recover from his failed marriage and start a relationship with the beautiful Ilona (Pallavi Ram). Things, he soon comes to realize, are not as tranquil on Ocracoke as they appear on the surface.

If the locals are insular and morally compromised in the movie Ocracoke, the actual residents of the island have been outgoing and welcoming, co-director Klein noted.

“Everybody’s willing to help everybody,” he said. “You know just kind of eyeballing what we’re doing.”

It has not just been the people who live in the village who want to help. When the movie called for a critical scene to be shot at the British Cemetery where much of the action takes place, a visitor to Ocracoke stepped forward. 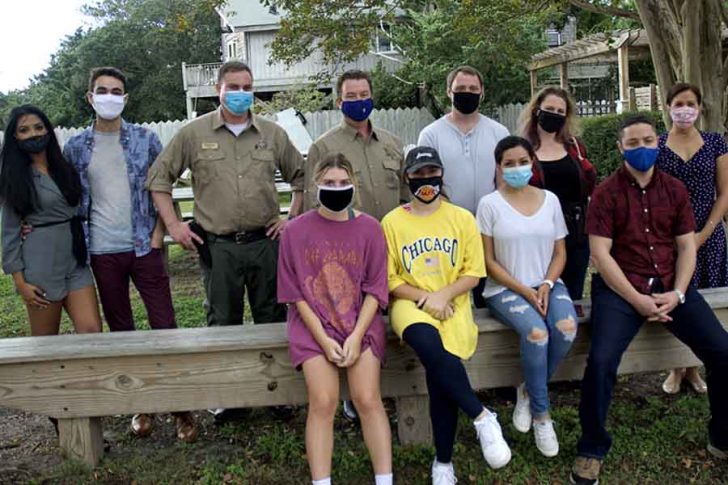 Some of the cast and crew of Ocracoke.

For most for the cast and crew, this is their first visit to the island. But for Dean, who has been coming to Ocracoke for years with his wife, the atmosphere and the look of the village seemed perfect for what he had in mind.

“My family and I have been coming to the Outer Banks for about eighteen, nineteen years. Even when our boys left the nest, my wife and I still came back. In 2014 we were here, and I was just like, ‘this would be a great place for a movie,’” he said.

Becoming more involved with the community, Dean has come to see that there are still scars from Hurricane Dorian. Living outside of Wilmington, he mentioned that there did not seem to be coverage of just how bad the storm’s devastation was.

And as he has come to understand the storm’s impact on the village, Dean is hatching another idea.

“We’re thinking when we’re done with this movie, if we can get it funded and completed…then in the spring, we want to come back,” he said. “This time to do a documentary about the resiliency of the people. About Dorian and the recovery. Then talk about the history of this place and how throughout history, this has been this resilient, independent, yet tight community.”