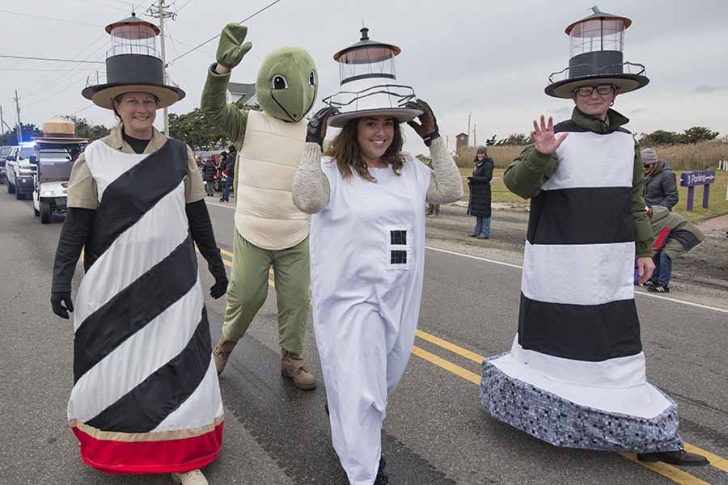 The National Park Service were the 2019 winners of the annual Hatteras Village Christmas Parade. (Photo by Don Bowers/Island Free Press.)

Update: Plans to turn the 29th annual Hatteras Village Christmas Parade into a socially distanced “Unparade” on Dec. 12 have now been cancelled, according to an event organizer. The “Unparade” concept featured a creative twist on the traditional parade format by having the floats and festive displays stay in the same spot while the spectators themselves move, cruising from one bright display to the next.

But with the recent surge of COVID-19 cases, organizer Karla Jarvis sent this message by email today explaining the decision to cancel the event.

“We wanted to make sure we were making the right decisions to keep everyone safe. In light of that, unfortunately, we have decided to cancel the ‘Unparade.’ While we realize this was to be a ‘contactless’ type event, some are still concerned about the uncertainties of what could happen and the rising numbers of infections we are seeing. We still have about a week to go before the event and it’s better for everyone involved if we go ahead and make this decision before people invest more time and money.”

For 2020, Hatteras Village will host its first-ever Christmas “Unparade”

The Coronavirus pandemic has led to the cancellation of a number of favorite Hatteras village events, however, there’s one decades-old tradition that will still go on this holiday season, with a few unique changes.

This year, the 29th annual Hatteras Village Christmas Parade will be transformed into an “Unparade,” where the floats and festive displays will be stationary, and the spectators will be on the move instead, cruising from one bright display to the next.

This reverse strategy for the traditional parade will ensure that everyone can remain socially distant, but can nevertheless take part in a favorite Hatteras holiday tradition.

“We have had to cancel all of our events since the Waterfowl Festival last February, and we were just dreading having to cancel this year’s parade, but we also want everyone to stay safe,” stated Karla Jarvis, who is one of the parade organizers along with Jordan Tomberlin. “So we started throwing ideas around, bouncing things off one another, and finally came up with this concept.”

The number of entries will dictate the exact “parade route,” but floats will generally be stationed in between the Slash Bridge and the smaller culvert bridge, just past Lee Robinson’s General Store. Participants can set up a traditional float along the parade route, but attendees are also welcome to set up a holiday scene or to decorate a home along the parade route.

“The idea is for the entries to remain stationary this year, and those who come to ‘see’ the parade will drive into the village, [stay] on Highway 12 through the village, and then turn left onto Eagle Pass and exit the village,” said Jarvis.

The entries will be clearly numbered and may even include a number of the homes and businesses right on the route, and folks who take a cruise to see the displays can vote for their favorites online after the unparade concludes at 4:00 p.m.

In addition, there will be a safe and fun scavenger hunt for younger attendees who want to compete for a goody bag, for an added dose of holiday fun. 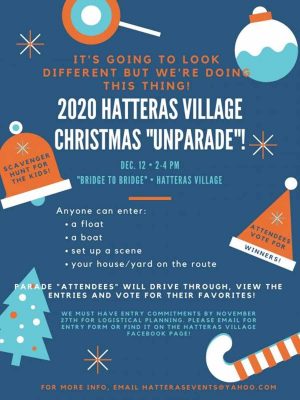 In order for the first-ever unparade to work, organizers are asking that everyone please observe the following:

Anyone who wants to sign up as a participant can do so via the unparade’s online form.  Participants will be contacted at some point after November 27 to receive their float placement, if applicable. All commitments must be made by November 27 for logistical planning.

For more information, folks can contact unparade organizers via email at hatterasevents@yahoo.com, or can obtain more details at https://www.facebook.com/HatterasVillage.