By Outer Banks Association of REALTORS (OBAR) on November 16, 2020 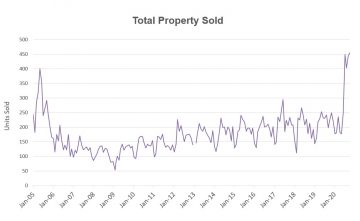 It is hard to know exactly where to start when so many records are being broken in the OBX real estate market. First and foremost, we have surpassed the 2005 record YTD total volume sold, having seen an astronomical $1.18 BILLION. October saw the highest monthly units sold at 456 which is an 104% increase compared to the YTD this time last year. Monthly under contracts were 97% higher than this time last year with 926 under contract.

Inventory is down drastically with total inventory dropping 44% to 1,337 units, of which residential dropped 56% to a mere 656 units available. Even lots and land dropped to 627 compared to this time last year! Speaking of lots and land, sales were up a staggering 163% with 84 units sold. That is an increase of 52 lots!

Clearly we are in the height of an enormous sellers market. REALTORS® are clamoring for sellers. If you know of someone thinking of selling their home, NOW is the time to contact a local REALTOR®!  You may search REALTORS® by visiting www.outerbanksrealtors.com.