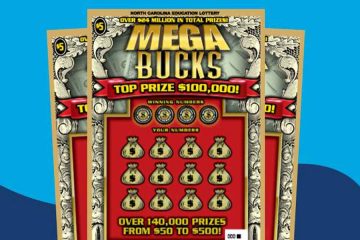 The North Carolina Education Lottery has announced that Burak Davrekanli, an international student who resides in Hatteras, has won a final $200,000 Mega Bucks top prize.

Davrekanli purchased his winning $5 ticket from the Food Lion in Avon after stopping in the supermarket to pick up some last-minute things for dinner. When his big win sunk in, Davrekanli started celebrating. “I was alone but I’m pretty sure all of Hatteras Island heard me because I was just screaming!” he recalled.

Davrekanli claimed his prize on Wednesday, Nov. 18 at lottery headquarters in Raleigh. After required federal and state tax withholdings, he took home $141,501. Davrekanli won the last $200,000 top prize so the lottery will begin steps to end the game.