Tundra Swans Return to Hatteras Island for the Holidays 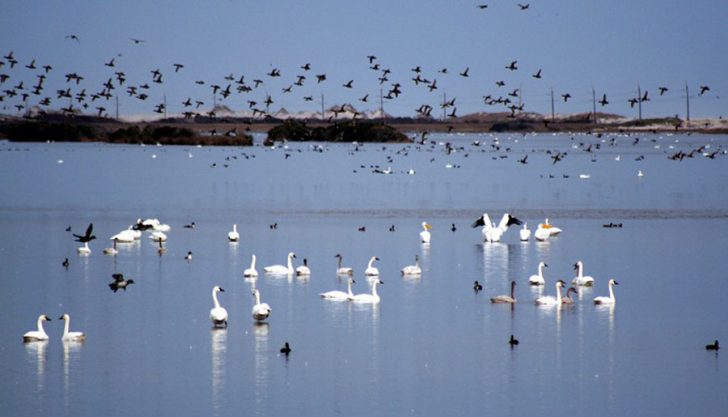 The Pea Island National Wildlife Refuge is arguably one of the most crowded attractions on Hatteras Island right now, but it’s not due to waves of human visitors. Instead, it’s due to the arrival of a wide range of migratory birds, which includes hundreds, (if not thousands), of tundra swans.

Tundra swans visit Eastern N.C. in droves this time of year, and Thanksgiving week is typically when the numbers are at their peak. 2020 is proving to be no exception, and Becky Harrison, Supervisory Wildlife Biologist for the Alligator River and Pea Island National Wildlife Refuges, reports that the number of tundra swans spotted at the refuge has continually been on the rise throughout November.

“At Pea Island, we typically start to see them around the middle or end of October, and they tend to hang around through the end of February or early March,” said Harrison. “Normally, we see them at their peak numbers right now – around Thanksgiving or early December – so this is a great week to see them at their highest population levels.”

The Pea Island National Wildlife Refuge has three major impoundments where the visiting birds tend to flock: the Visitors Center, the North Pond, and the South Pond, which can all be accessed via a network of walking trails.

Harrison, who routinely visits the Outer Banks’ refuges to survey the visiting wildlife, reports that as of Tuesday, November 24, there were roughly 800 tundra swans in the South Pond alone, and that the current population levels are consistent with years past.

“The maximum number of tundra swans last year [at Pea Island] was just shy of 2,200 on our peak day, and we’re right on target to hit that level this year, or maybe even a little higher,” she said.

Pea Island, as well as the greater Eastern N.C. region, is at the heart of a major migration route, (the Atlantic Flyway), which is why the area attracts so many feathered wintertime visitors. “Pea Island, and all of Hatteras Island really, provides a great stopover on the migration route,” said Harrison. “There are plenty of food sources, so we see a lot of birds this time of year. There are migratory waterfowl, but also shorebirds and waterbirds as well.”

When and how long the tundra swans and other feathered residents winter on Hatteras Island is often decided by factors off the island. “Their time of arrival is influenced by other places,” said Harrison. “It’s dependent on the weather conditions at the breeding grounds where they are coming from, and the temperatures further north could be pushing them down to us as well.”

“As Christmas and the New Year approaches, the [population] levels tend to decrease, as the majority have moved on, or have moved inland to more agricultural fields and areas.”

Tundra swans breed and nest on arctic tundra habitat, and are only observed in the U.S. during migration periods, and in the winter months. Eastern North Carolina provides wintering habitat for an average of 70,000 tundra swans, or roughly 65-70% of the entire eastern tundra swan population.

Alligator River National Wildlife Refuge, which is located on the Dare County mainland, is also a great place to see large groups of tundra swans and dabbling ducks like Northern pintails, green-winged teal, and gadwall.

But Hatteras Islanders who want to burn off those excess Turkey day calories in a socially distant and scenic setting can enjoy an easy birding adventure close to home with a visit to the Pea Island Refuge.

“The best place to see them right now is probably the North Pond,” said Harrison. “[Visitors] can walk around the perimeter of the pond, and the [trail] also features a photo blind, and a new viewing platform between North Pond and South Pond along N.C. Highway 12.”

“It a great time to wander around Pea Island, because we are just getting into the throes of waterfowl season,” she added. “It’s a familiar seasonal reminder that we’re finally getting into winter – like your friends are coming back into town with the changing season.”

Where to See the Tundra Swans Up Close

A good starting point to see the tundra swans is the Pea Island National Wildlife Refuge Visitors Center, which connects with the North Pond Wildlife Trail, immediately behind the parking area.

Wildlife trails within the refuge are open year-round during daylight hours, and are fully disabled-accessible. Neither pets nor bicycles are allowed on walking trails, and more information can be found at https://www.fws.gov/refuge/pea_island/visit/visitor_activities/wildlife_trails.html.