Can mask wearing mandates be enforced?

Nags Head Board learns the answer may be no 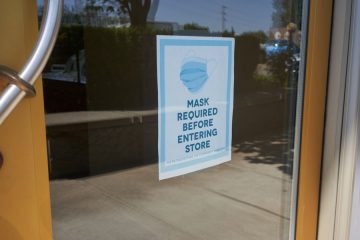 At their Dec. 2 meeting, held coincidentally on the same day that Dare County reported a record high 37 cases of COVID-19, some members of the Nags Head Board of Commissioners expressed frustration over people not complying with the state’s mask-wearing requirement. And they raised a question that seems to have no easy answer.

On Nov. 23, Governor Roy Cooper issued Executive Order 180 tightening the statewide mandate requiring masks whenever people are with others not in their household. The order gives law enforcement the authority to issue criminal citations to those who fail to wear face coverings, as well as to a business or organization that fails to enforce the requirement. Officers can also enforce trespassing laws against those who fail to wear face coverings and refuse to leave the premises.

Under the state’s COVID-19 County Alert System, Dare County is currently in the Orange Zone, indicating it has substantial community spread of the virus. The North Carolina Department of Health and Human Services suggests officials in those counties should, among other actions, adopt ordinances that allow for the use of civil penalties for enforcement of the statewide restrictions.

But as a practical matter, enforcement of the mask requirement gets complicated. For one thing, issuing a criminal citation is not an effective approach if the district attorney will not prosecute such cases. And, according to some experts, the ability of local governments to take a less heavy-handed approach and issue civil citations may not be a legal option.

At the Dec. 2 meeting, Nags Head Town Manager Greg Sparks said that Nags Head Police Chief Phil Webster had held a discussion with the Office of the First District DA Andrew Womble, and “they declined to do enforcement actions on businesses that fail to follow those guidelines.”

“I think that has been bit of an issue, knowing that your primary enforcement tool doesn’t really seem to be available,” Sparks added. “So, we really have to rely more on education and working with those businesses.” A Voice effort to reach Womble for comment was unsuccessful.

During the meeting, Town Attorney John Leidy also cited a UNC School of Government blog post by Associate Profession of Public Law and Government Trey Allen that suggested a municipality’s hands may be tied if they trying going down the civil, rather than criminal route.

In his blog post, Allen said that some cities and counties are considering what additional steps they could take to reduce the spread of COVID-19.

“One proposal that has received considerable attention would have them impose civil penalties for violations of the Governor’s COVID-10 executive orders…This blog post concludes that [they] probably lack statutory authority to implement that proposal, thanks largely to a legal doctrine that generally prevents them from forbidding conduct that’s already illegal under state law.”

Leidy also explained that a local government can only adopt laws that it has been given express authority from the legislature to adopt, and that the governor’s order is not the same source of authority for the town to adopt its own laws.

“It has to have some other independent source, through the Constitution or through general statutes, in order to adopt the law,” Leidy said in the Voice interview. “And so I think that’s really the reason why we can’t just take the governor’s order and say, ‘Well based on this, we could either just enforce the order or we could use the order as a basis for adopting our own requirements into an ordinance.’”

At the Dec. 2 meeting, Nags Head Mayor Ben Cahoon told fellow commissioners that the town’s focus to this point has primarily been “on guiding the board and staff to conduct public business in the safest way possible…and messaging, messaging, messaging.”

Commissioner Renee Cahoon noted that some businesses, such as Fresh Market, have been doing “a fabulous job.” Others, she said, are not. “It’s a shame that some businesses are not taking it more seriously…It’s unfortunate that every community has those not thinking about their health or other people’s health.”

Summing up his takeaway from the discussion, Fuller said, “I think education is great, but regulation is sometimes a last resort. And it doesn’t even sound like we have that opportunity.”