Jug Handle Bridge 54% Complete; Opening Date Pushed Back to the End of 2021 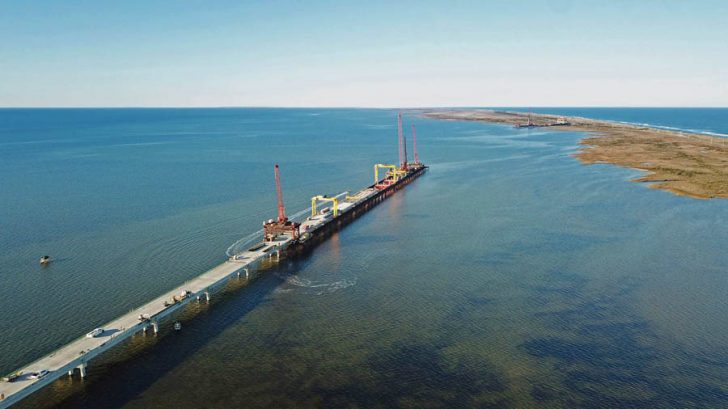 The 2.4 mile-long Jug Handle Bridge is 54% complete as of December 3, however, the projected opening date for the bridge has been pushed back from the fall of 2021 to the end of the year, per an update from North Carolina Department of Transportation’s (NCDOT) resident engineer for the project, Pablo Hernandez.

“As far as completion, right now we are targeting late 2021,” said Hernandez at the Dec. 3 virtual update meeting. “In previous updates, we were targeting the fall of 2021, but unfortunately, we are seeing that completion date slip a little bit.”

Hernandez expanded on several of the recent challenges and delays, which included slower progress on the northern end of the bridge.

“People driving by have noticed that the northern end of the project is not progressing as fast as the southern end of the project, and that is because pile installation continues to be more challenging than expected,” he said. “[This] has been a common theme in the last couple of community update meetings.”

Several different techniques have been explored over the past few months to ease the piling installation difficulties, such as using a 36” diameter auger to loosen the soil during the pile installation.

“We anticipated for the contractor to move back into the [Jug Handle] project in the late summer and fall, but with the good weather we are having, and the number of other projects in Eastern N.C., they have been focusing on other projects in the state,” said Hernandez. “With that being said, I would not be surprised if we saw them [start the next phase] in the new year, when the weather is colder.”

Once this work begins, single-lane closures will likely be necessary at the bridge site.

As far as completion of the bridge structure itself, 62 of 108 bents – or supports for the bridge – have been installed, which equates to 218 of 352 pilings that have been driven into the ground.

52 of 107 deck spans for the bridge have also been cast as of December 3. “Hopefully, we can increase that number to 53 tomorrow, and 54 on Monday, depending on how the weather cooperates,” said Hernandez

He also noted that with the cooler winter weather, the early morning concrete placements will likely be reduced or eliminated, but this could change due to schedule demands.

The virtual update meeting also touched on the corresponding efforts of Cape Hatteras Electric Cooperative (CHEC) to move the existing transmission lines to the new structure.

CHEC has already begun phase 1 for relocating the transmission lines at the southern end of the bridge by installing underground pipes to run the lines. “Those on the south end of the project may have noticed that one house has been moved – that was a property that CHEC acquired,” said Hernandez.

At the northern end of the project, CHEC’s phase 1 transmission line relocation is expected to begin in early 2021.

Once complete, the Jug Handle Bridge will connect the southern portion of the Pea Island National Wildlife Refuge to northern Rodanthe, bypassing the S-Turns section of N.C. Highway 12, which is highly susceptible to breaches and ocean overwash during storms.

Updates on the status of the Jug Handle Bridge, as well as planned construction activities in the coming month, are available online at https://www.ncdot.gov/projects/nc-12-rodanthe/Pages/planned-construction.aspx.

In addition, more information on the bridge project, which includes project history, maps, documents, and videos, can be found at https://www.ncdot.gov/projects/nc-12-rodanthe/Pages/default.aspx.