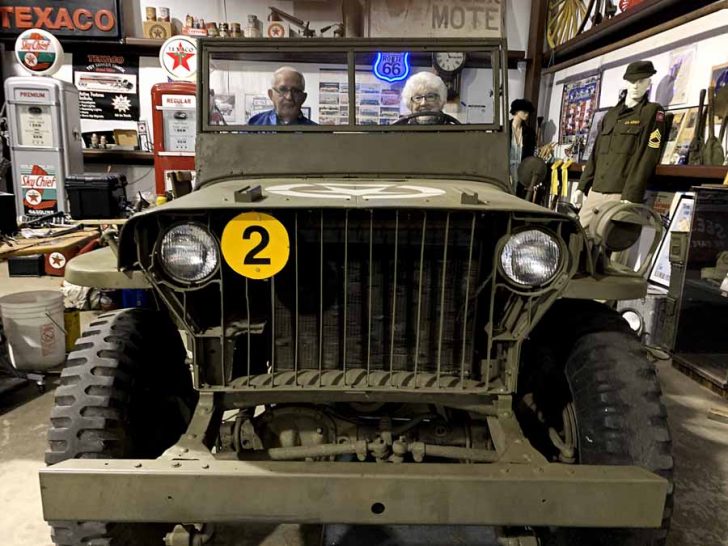 Rad and Marge Tillett in 1941 Jeep Willys, the first version of the car that won WWII. (Photo by Kip Tabb)

The special collections of Rad and Marge Tillett

There’s a lot of history in the big garage behind Rad and Marge Tillett’s house in Kitty Hawk. The history of Kitty Hawk, the history of the Outer Banks and even more. But then, Rad and Marge are part of that history themselves. The couple, in their 80’s, will be married 66 years in June.

Rad’s grandparents were the Tilletts who owned the farm that’s now much of the western side of Nags Head Woods.  “My Tilletts was from Nags Head Woods,” Rad says. “That was my grandfather. Erb Tillett.”

And Marge? She’s a Duvall…not the Duvalls that settled in Nags Head Woods. She’s from the other side of the water. “I’m from the bootlegger side of the family. My granddaddy was from Buffalo City,” she says. 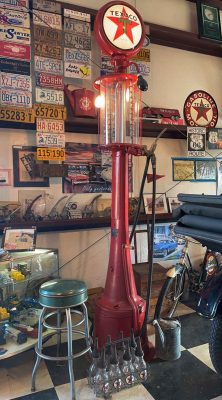 Rad grew up in Kitty Hawk and remembers it when it was truly a village. There was the Zane Perry store on Kitty Hawk Road. It was a Texaco Station with what might have been the first gas pump in the village. “Either the first or the second,” Rad says. The gas pump is part of the garage collection now, beautifully restored, looking as though a motorist could stop by at any time, hand pump gas into the glass chamber at the top and fill their car up. Rad didn’t get the pump right after the store closed, although he wanted it. He had to wait a while. “I had a hard time getting it,” Rad recalls. “When they closed the store, I went and tried to buy it, and they were cousins, second cousins to me. They wouldn’t sell it to me.”

The building was moved to Nags Head to become a retail store and the Perry brothers gave the pump to the man who moved it. “I called him and asked him if he would sell it and he said, no he was going to restore it.  Twenty years later he said, ‘Rad, come get your gas pump.’ So I went up there and he gave it to me,” he says. “He hadn’t restored it,” Rad adds. The pump, beautifully restored now, is one piece of the history of Outer Banks. But there’s much more in the garage.

There’s a juke box along the wall that began its life in one of the most famous of Outer Banks landmarks. “That jukebox there. That was the last jukebox in the [Nags Head] Casino. I bought it from a Restaurant, By George Restaurant, when they tore it down” in 2004, he explains.

Mike Kelly had run the restaurant for a few years but had sold the property and the building was going to be demolished. “They were tearing it down. I bought it at auction,” he says. The price may not have been the best, but Rad mentions that he got some of his investment back: “I took the change thing out, drilled it out, and there were about $93 in quarters in there.”

Rad’s not sure why, but he’s always has been fascinated with old cars and fixing them up. “When I was twelve, I bought one of the first hot rod magazines ever came out,” he recounts. “I’ve always liked old cars.” He remembers that back in 1953, he had a ’52 Chevy, but he still went out and bought a 1931 Model A.

The garage is also filled with cars, each with its own story. There’s a 1923 Model T. “They were pretty primitive cars,” Rad says.

The black 1961 Thunderbird two-door coupe still gets out on the road from time to time, it’s the one Marge says he likes to ride. There’s a 1977 Oldsmobile 88 Indy Pace Car that someone left to Rad and Marge in his will, knowing the car would be cherished. And the 1978 Pontiac Bonneville was given to the couple because it was taking up space in a garage and was not going to be driven.

Yet, there is one car that may be the most important, perhaps not in monetary value, rather in its emotional ties to Marge. The car is a 1941 Jeep Willys, the first of the cars that would go on to fame in World War II. “I lost my daddy in WWII. When I see that car, I can see all those boys fighting for our freedom,” Marge says.

Machinist’s Mate 1st Class Robert Duvall was on the USS Colhoun when Japanese bombs sank the ship in 1942.

“He was killed at Guadalcanal. He was twenty-nine when he was killed. And I was five. He was a Coast Guard boy and they put him on a Navy ship, the USS Calhoun,” she says.

The wall next to the Jeep is a wall of remembrance. There is the letter from WWII Secretary of the Navy Frank Knox telling the family that Machinist’s Mate 1st Class Robert Duvall had been killed in action. There’s a letter, stamped “return to sender,” written and sent too late to reach Marge’s father. A picture taken at the dedication of the WWII Memorial in Washington, DC is also on the wall, and a 1944 Series E War Bond.

Marge looks at the wall, then back at the Jeep and says, “This is what won the war, you know. Eisenhower said we could not have won the war without this Jeep.”