‘It feels good in the heart’ 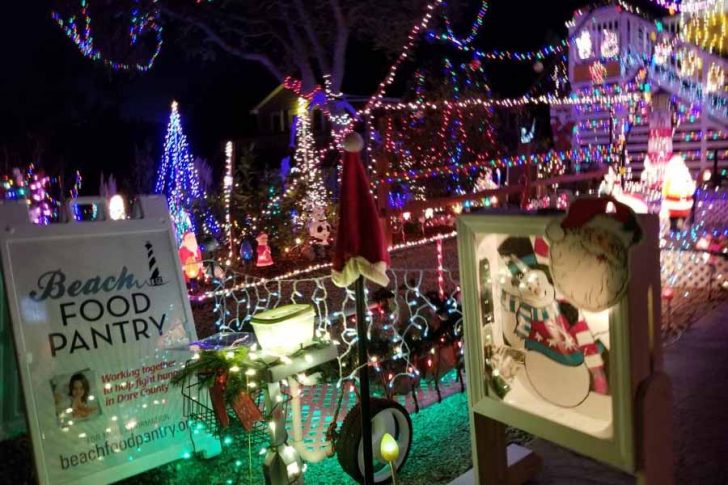 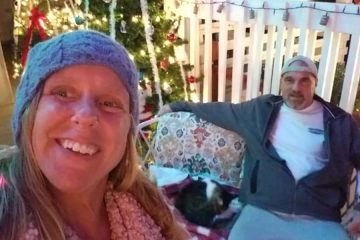 For Deborah Mennicucci and her family, lighting up their house at 206 Clamshell Drive in Kill Devil Hills during the holidays has become as much about giving back to the community as it has been about spreading Christmas cheer.

When Mennicucci’s husband, Dave, first began decorating their home and yard about a decade ago, it wasn’t quite like it is today – with its 70,000 to 80,000 lights that twinkle, shimmer, fade and dance to the beat of 14 different Christmas songs in 48 different zones that Dave has programmed himself using the Light-O-Rama system.

But along with the growing display, the Mennicucci’s Hands of Gold Christmas Lights took on another purpose seven years ago. That’s when their family, which includes their teenage sons Eric and David, began using it as an opportunity to collect food and monetary donations for the Beach Food Pantry.

“That’s really been our main push,” Deborah Mennicucci told the Voice in an interview. “The more people who come out to see the lights, the more donations we hopefully will get to help the Beach Food Pantry, which of course, in turn, helps our community.”

The Mennicucci’s efforts began by placing a container out in their driveway during the lights display to collect cash donations and food. “That first year, I don’t even think we collected $100… and 200 pounds of food. It wasn’t very much, but we were just so excited,” she recalled.

Over the years, as the display continued to expand, so did the donations. Last year, the Mennicucci family raised $1,182 and collected between 600 and 700 pounds of food, drawing about 1,200 cars that passed by their home to see the lights.

Since turning on the lights on Thanksgiving Day, the Hands of Gold light display this year has already raised more than $600 in donations for the pantry. “It’s amazing…it has been a banner year already and people have been so incredibly generous so far. We’re really hoping to blow records this year [with what we] bring to the food pantry, which would really be such a blessing,” Deborah said.

Like many non-profit organizations, the Beach Food Pantry could not hold fundraisers this year due to COVID-19 restrictions, making the family’s efforts all the more important. “We’re really excited that so many people have found us and are being so incredibly generous. That’s the best part,” she noted, adding that it takes Dave, who begins working on the display in early October, roughly 200 hours to complete.

While her husband may do a lot of the work, Deborah says that running the display is a family affair, with members often out in the driveway to greet passersby. As for the impact it’s had on her family, she adds, “I feel like we’re helping teach our boys the importance of giving back, and they almost look more forward to knowing how much money we collected every night than we do. They can’t wait to go out there and get that money and count it up to see how much we got. After Christmas, we gather it all up in the van and as a family, we go to the Beach Food Pantry and turn it all in.”

In the past, the Hands of Gold Christmas Lights stops collecting for the pantry on Christmas Eve, but Deborah said that the family plans on continuing its efforts through New Year’s Eve, which marks the last evening of the display. Visitors are welcome to drive by, walk in the driveway but are asked not to enter the yard.

The display lights up at dark seven days a week and stays on until 9 p.m. on the weekdays and later on the weekends. People can also tune into 107.9 to enjoy the music that goes with lights.