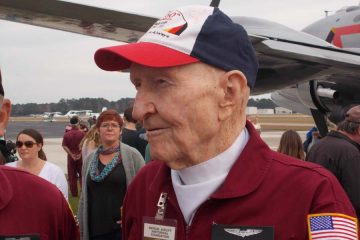 According to his very good friend, Karin Edmond, Gail Halvorsen, the famous “Candy Bomber” whose annual visits to the Outer Banks have brightened the Christmas season for two decades, has been diagnosed with COVID-19.

In a brief interview with the Voice on Dec. 11, Edmond, who had spoken to his family, said the 100-year-old Halvorsen developed COVID symptoms on the night of Dec. 10. Halvorsen, who lives in a retirement home in Provo Utah, is being quarantined and is reported as “slightly improving” today, according to Edmond.

The lives of Edmond and Halvorsen became inextricably intertwined nearly three-quarters of a century ago when Halvorsen, a U.S. pilot, began dropping candy out of his plane to a group of hungry German children during the post-World War II Berlin Airlift. Edmond, a child in Berlin at the time, was one of the beneficiaries of that singular kindness.

Edmond was recently on hand to celebrate the “Candy Bomber’s” 100th birthday in October. Everyone’s thoughts and prayers are with this wonderful man.

‘It has been a fantastic life’