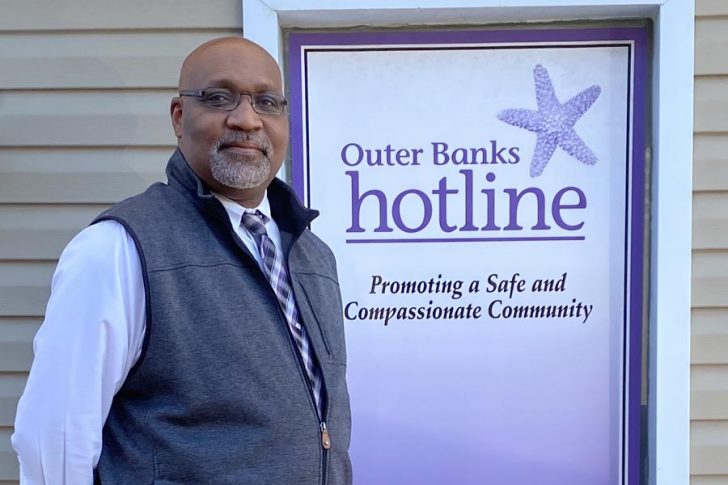 Our second installment in the “Getting to Know” series focuses on an organization that is sadly, essential to every community.

The Hotline is a grassroots non-profit that provides support and advocacy to victims of domestic violence, sexual assault and human trafficking. In addition, the Hotline engages in public education about these issues to ensure people are aware of its services and to remind us that while we live in what seems like paradise to many, the grim realities that affect all communities reside here as well.

We talked with Michael Lewis, the Executive Director of the Outer Banks Hotline, to learn more about how the organization has maintained its focus in the pandemic and in the process, we learned a little about the person who has been a part of the Hotline and this community for two decades.

Lewis began by describing the struggles Hotline has faced during the COVID-19 pandemic. “Our biggest challenge has been providing adequate services while maintaining the safety of our clients and staff,” he noted. While Hotline maintains a 24/7 Crisis Hotline, part of its work necessitates personal contact with their clients and COVID has made that effort far more difficult.

Unfortunately, and similar to other non-profits, Hotline’s fundraising has taken a significant hit as the lockdowns, gathering restrictions and general weariness among the public have reduced traffic in their thrift stores and forced the cancellation of a fundraiser that has become a cherished Outer Banks tradition  —The Festival of Trees. The loss of these financial resources has made it more difficult to provide the needed services Outer Banks Hotline offers its clients.

Lewis credits his staff, board and volunteers for the work and their perseverance as the pandemic closes in on the one-year mark. But he highlighted one person, Lynn Bryant, as “the architect of what Hotline has grown into. She dedicated the better part of her life to this agency and deserves all the credit for any success it has.”

When asked about his views about the charity of the Outer Banks community, Lewis doesn’t hesitate to respond. “The OBX community is the most charitable community I have lived in.  You have people from all backgrounds, religions, and races. But when they see someone in need they come together.”

Turning to Lewis himself, we asked how he came to the Outer Banks and his background before arriving in the community.

“After college, I joined the US Army as a Military Policeman. After my time in the military, I was looking for some way I could help people and by chance, came across Outer Banks Hotline. I actually started at Hotline working in the thrift shops picking up furniture.  After three years, Lynn asked me if I would take over the general manager’s position and…here I am twenty years later,” he relates.

One aspect of Lewis’s life is Freemasonry. He is an active member of Sandy Ridge Lodge #230 in Jarvisburg, NC, where he is the Worshipful Master and a Past District Deputy Grandmaster for the First Masonic District, Prince Hall Affiliation (PHA). Lewis is a fourth-generation freemason and credits the organization with “helping me become the man I am today.”

Our next query focused on Lewis’s fondness for a certain porcine-related food, as anyone who follows him on social media is quick to uncover. Bacon is the subject of the majority of his posts and they include bacon recipes (where bacon is typically the only ingredient), bacon pictures, bacon memes and bacon jokes.

Lewis responded in characteristic fashion. “I started posting about my love for bacon on Facebook as a joke, and it kind of grew since everywhere I went people kept mentioning seeing the posts and how funny they found them. Thank God my doctor isn’t on Facebook. I don’t think he would be too happy with my eating habits!”

“When not eating bacon,” he adds, “I spend time watching the Washington football team, which feels funny saying since I’ve been a Redskins fan all my life. And hanging with friends.”

In his free time, Lewis enjoys dining out at Outer Banks restaurants and spending time on Ocracoke Island. When asked about his favorite place that he has visited in his travels, the answer is Japan.

“I was only supposed to be there one day catching a flight from Korea to the ‘States,’ but ended up staying a week!” he says.

We concluded by asking Lewis to reveal one thing about himself people might find interesting or funny. “The funniest thing about me is I’m not as funny as people think I am,” he quipped.

We’re not sure we agree with that assessment. What we do know about Michael Lewis is that while he labors in an area where the worst aspects of human behavior reveal themselves, he maintains a positive attitude and an incredible sense of humor, all of which has made the Outer Banks Hotline an integral part of the community.