‘These have been very trying times’

Sheila Davies is in the middle of Dare’s COVID fight 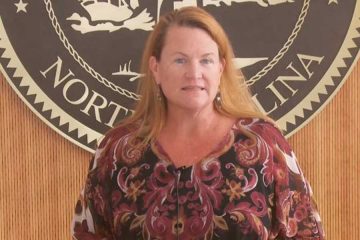 More than nine months ago – on March 2 – Sheila Davies gave her first briefing to the Dare County Board of Commissioners on COVID-19. At that point, as the director of the county’s Department of Health and Human Services (DHHS), she had already activated the department’s Epidemiology Team and was preparing for what public health officials were certain would soon become a pandemic.

The next day, the state of North Carolina had its first diagnosed case of COVID-19 as the battle against a once-in-a-century pandemic suddenly thrust public health officials — at the national, state and local levels — onto the frontlines.

In the weeks and months that have followed, Davies has become one of the most influential public officials in Dare County, providing data and guidance to the county’s top decision-makers hoping and trying to balance community interests while working to curb the spread of COVID-19. Those decisions have affected key aspects of daily life here – such as when to close and open the county to visitors and non-resident property owners and when to close and open school buildings to Dare County students.

There is a very public element to Davies’ role, too, as she routinely issues press releases and video messages that provide local COVID-19 updates and guidance to residents as the pandemic surges on. Having served nine years as mayor of Kill Devil Hills before deciding not to seek re-election in 2019, she is not new to the headlines or spotlight. But given the passions and polarization surrounding this pandemic, the glare is clearly brighter now.

“Public service is both challenging and rewarding,” said Davies, explaining how her years as mayor has served her during these COVID months. “While I certainly understand that I cannot always please everyone, I also know that I have an extraordinary opportunity to help my community.”

“These have been very trying times,” she also acknowledged. “My phone rings seven days a week, all hours of the night and day.”

Davies has received praise from local leaders and a substantial number of community members, but there is another side to that spotlight as well.  Some social media critics have pounced on a November road trip her family took to Missouri for her son’s elite soccer tournament. And her process for quarantining teachers and students became part of an impassioned debate after the Dare County schools shut down in November, only three weeks after they had re-opened.

Davies, who grew up in Suffolk, Va., lives with her husband and two school-aged sons in Kill Devil Hills. She attended the College of William and Mary, earning an undergraduate degree in Psychology and Kinesiology and later received her Master’s in Public Administration and PhD in Public Policy and Administration, with a Health Policy Specialization, from Walden University.

After moving to Dare County in 2000, and before taking over as the county’s public health director in 2014, Davies served a stint as the Outer Banks Family YMCA executive director and was also a Dare County DHHS substance abuse project manager who oversaw operations at the former New Horizons, the outpatient substance abuse treatment clinic in Nags Head that is now home to Port Health. In 2018, Davies was promoted to DHHS director after longtime director Jay Burrus retired.

Two years later, when the pandemic struck in early 2020, Davies put into practice what the department’s Epidemiology (EPI) team had only rehearsed in annual trainings and mock exercises — everything from disease investigation and surveillance to contact tracing and mass vaccination.

The first positive case of COVID-19 was confirmed in Dare County in late March. About that same time, the group of local officials known then as the Dare County Control Group made the controversial decision to restrict entry to all visitors and non-resident property owners (NRPOs) – a declaration that lasted until May. Several months later, Dare County officials settled a lawsuit in which they agreed to classify NRPOs the same way as residents during public health emergencies.

Davies played a pivotal role in the Control Group’s early meetings, providing local and regional data and guidance from the Centers for Diseases Control (CDC) and North Carolina Department of Health and Human Services.

Meanwhile, the Dare County Schools opened the 2020-2021 year with all students in remote learning before the Board of Education voted to re-open classrooms starting Oct.  26. But schools were able to remain open just a few weeks before the board, on Nov. 13, voted to return all students to remote learning through the end of the first semester, primarily due to teacher shortages.

During that Nov. 13 discussion, Davies’ decisions over who and how to quarantine after a positive case in the schools came under fire from some quarters, most notably from then-Board Member Harvey Hess who questioned whether local quarantine practices were excessive.  And during the public comment period at the Dec. 8 Dare Board of Education meeting, five members of the public submitted comments criticizing the closing of the schools as well as the quarantine practices.

At that same meeting, the board, in an effort to seek more guidance on the matter, opted to table a revision on its agenda giving partial authority to local health department officials in developing and implementing protocols mandated by the state.

Davies said her department is following the Centers for Disease Control and NC DHHS guidance that requires individuals to quarantine who have been within six feet or less of a COVID-positive individual for a cumulative 15 minutes over 24 hours during their contagion period.

While noting that Dare County Schools were “able to provide a safe face-to-face learning environment,” Davies in her response to the Voice said that the rising COVID cases in the community impacted cases in the schools and their ability to safely and appropriately staff classrooms.

The Dare County Board of Education will meet Jan. 7 to address how to move forward with schooling when the second semester begins on Jan. 20. Davies said she was invited to the meeting and will attend.

As for the discontent about school closures, Davies, says she too looks forward to when her sons can return to school under normal conditions and acknowledges the hardships it has created for families.

“They miss the face-to-face interaction and I know it is incredibly valuable on many levels,” she noted. “Unfortunately, it will still be many months before there is the potential to return to school under normal conditions. Until then, I think schools should do the best they can to accommodate the various acute needs of students and families.”

The pandemic has also taken its toll on DHHS staff, and the department has hired some additional part-time staff to help with contact tracing and COVID-19 administrative efforts.

Noting that her department has been working on COVID-19 seven days a week since March 1, Davies said that her staff has felt the “same or similar stress as community members plus the added stress that comes with being on the frontlines of the response efforts.” She added that in addition to the county’s Employee Assistance Program, a support line for staff members has been established.

For his part, Dare County Commissioners Chairman Woodard hailed Davies as dedicated and accomplished public servant.  “We have the utmost faith and confidence in her, and she’s worked tirelessly throughout this COVID-19 pandemic to keep our citizens informed. She’s very compassionate about making sure that the public has as much information as they can have,” he said.

These days, no one in public life escapes the scrutiny of social media. And Davies has been criticized by some for a recent trip her family took to Missouri at a time when public health officials are advising against holiday travel to gather with friends and family.

In explaining the trip, Davies said that her oldest son was selected to represent the northeastern United States in an elite soccer tournament and her family, who quarantined when they returned home, traveled in a personal recreational vehicle while following all CDC guidelines for reducing the risk of spread. She added that the only interaction the family had was among the four of them, other than when her son was on the field

“The tournament had very strict COVID-10 mitigation requirement,” she said. “It was a fantastic example of how we can maintain some level of normalcy for our families while continuing to follow strategies to reduce the impact of this pandemic.”

Speaking more broadly, she said that “Some, unfortunately, seem to think that we are in an all- or-nothing situation and that’s not true at all…The key to beating this is compromise that supports our personal freedoms while protecting our neighbors, supports our mental health while protecting our physical health, and allows our children to have valuable experiences while teaching them their responsibility in contributing to the greater good.”

As for her own mental health, Davies said that when she does have spare time these days, she likes to spend time with her sons and husband, whether it’s to kick the soccer ball around, play balloon volleyball inside their home, take walks or watch movies.

And what she describes as “unplugging” has been one of the most useful stress management tools to help her through the pandemic. For her, that means “putting my phone and computer away for a bit and doing art projects with my youngest son or going for walks with my oldest son.”

Catching a good college basketball game on television, she added, is another perfect way to “unplug.”