WHAT TO WATCH ON TV
Stream On: Existential Britcoms Last of the Summer Wine and Waiting for God 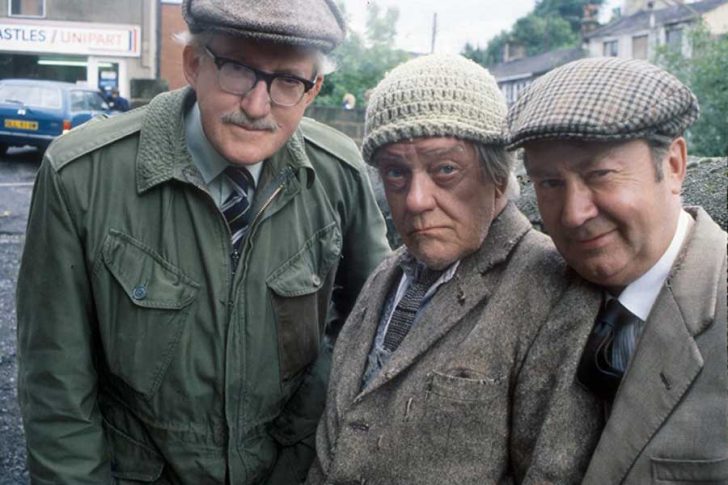 Foggy Dewhurst, Compo Simmonite and Norman Clegg explore the world around them, experiencing a second childhood with no wives, jobs, or responsibilities in Last of the Summer Wine. (IMDb.com)

Nostalgia transcends space and time. For instance, I’m nostalgic for Yorkshire in northern England, not because I remember it, but because I recall the possibilities of my youth when first I discovered Last of the Summer Wine. Mad Men’s Don Draper describes it poetically in the episode “The Wheel”: “‘Nostalgia’ literally means ‘the pain from an old wound.’ It’s a twinge in your heart far more powerful than memory alone. It goes backwards, forwards, takes us to a place where we ache to go again.”

LAST OF THE SUMMER WINE [Britbox]

This is the world’s longest-running series, running “over” or “nearly” 30 seasons [according to its BBC website]. More remarkable is that every episode was written by Roy Clarke, despite having more than a dozen other notable shows on his résumé. (And at age 90, he’s still at work.) I suspect he wrote Last of the Summer Wine in his sleep.

Three pensioners, one newly widowed, wander around their home town. They have no obligations and have reverted to the trio they were in high school. They have had different lives; the show’s website describes them as “the upper, middle and lower classes writ large: Former Royal Signals Sergeant and notional gang leader Cyril Blamire; flat cap-wearing voice-of-reason Norman ‘Cleggy’ Clegg and scruffy hormone-riddled layabout Compo Simonite,” and they’re together again.

They roll tires down hills, poke around trash fills, lay in the grass, do washing in public launderettes, eat in restaurants or pubs, hang about the public library—and talk. Occasionally other characters in the town have comic scenes, not necessarily in connection to our trio. Credit where due to Jerry Seinfeld and Larry David, but Last of the Summer Wine is the original “show about nothing.”

“Perhaps we’re dead, and this is the place we’ve come to.”

“Or maybe the other place!”

“No, it wouldn’t be the other place…”

“In Yorkshire? I think it’d be further south.”

[Here’s a trailer for this oddly addictive show from IMDb.com.]

While Waiting for God, Tom is mostly cool with everything—but Diana is a red-hot poker who won’t be quenched. (IMDb.com)

I was certain I had seen Samuel Beckett by the Central Park Boathouse, my favorite hangout, in the 1980’s. Subsequent internet research tells me he was indeed [in New York in 1984]. He’s probably best-known for his existentialist play Waiting for Godot, in which two characters bide their time. I’m fairly sure the writers of both Last of the Summer Wine and Waiting for God were fans.

“Retired photojournalist Diana Trent finds herself in Bayview Retirement Home and is pretty damn angry about it—as she is about virtually everything.

“Suffering fools not at all and with a nifty line in putdowns, she despises anyone who believes her useless because she’s old. “Chiefly among those are shiftless Harvey Bains, manager of the care home to whom his ageing charges are merely things he wishes would just die and save on the bills, and his intellectually challenged sidekick Jane who insists on trying to touch him.

“The only person she does have time for—and that grudgingly so—is Tom, a nice but somewhat otherworldly older gentleman placed in the home by his alcoholic daughter-in-law and drippy son. Diana regards Bayview very much as a place to undermine, and proceeds to do so, with Tom cheerily helping her along the way.” With more character and situation development than Last of the Summer Wine, Waiting for God is by turns tranquil (Tom), hilarious (Harvey and Jane), and with Diana, incredibly cynical for a “gentle” sitcom.

[Here’s a clip from IMDb.com: “Stuck in a Situation Comedy.”]

Next time, a Christmas story about Jean Shepherd.