A grand Christmas display in Grandy

Daryl and Verdery Hood have always been self-described “Christmas people,” going all out when it came to decorating their home for the holidays.

But for the last 15 years, the Hoods of Grandy have used their creative talents to spread Christmas cheer inside and outside their home at 173 Carolina Club Drive. And for them, each of their decorations and displays have a story to tell – from the festive dogs and cats painted on plywood to the jumping dolphins that follow Santa’s sleigh.

With more than 60,000 twinkling lights and numerous eye-catching displays, Daryl, a carpenter, and Verdery, an artist, transform their plantation home and neighboring lot each year into a spectacular holiday display.

While the couple had always decorated for the holidays since they lived in Colington more than two decades ago, after moving to Grandy 16 years ago they really began to showcase not only their Christmas spirit, but also their talents.

“It turned into kind of like our own little Christmas story in a way,” Daryl explained, noting that each scene has a story behind it, like the kittens in socks on the balcony and the Christmas pups that are featured at each of the house’s six columns on the lower level. 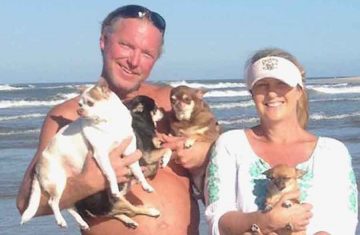 The owners of a number of cats and dogs, Daryl explained that, “We’re animal people, we always have been.” In fact, Daryl said, he is known as the “cat man” of Grandy because he has been taking care of the feral cat colonies in that area even before he moved in.

And the eight-foot Frosty the Snowman that towers in the yard, he explains, is him. The two women at Frosty’s side – in cocktail dresses and holding trays of martinis – are meant to be Verdery and her sister.

As for the lot next door, the Hoods have Santa driving a boat that is hooked up to a team of nine reindeer, and behind the boat is about 4,000 blue lights that resemble water. On top of the water are two Cypress Garden water skiers and three Christmas dolphins jumping behind the boat, all painted by Verdery.

The idea for the dolphins, Daryl said, came from his mother and wife after the three of them saw dolphins one year putting on a show during a boat ride to Oregon Inlet. Santa’s boat is coming through an enchanted forest of 20 trees Daryl has made from plywood, and each tree has 1,000 different colored lights on them.

The lights of the Hood’s artistic display go on at about 5:30 p.m. and stay up until midnight each night through Jan. 5. Daryl said that while their home doesn’t get as many passersby as he would like because of its location, it only takes one look from a child to make it all worth it.

In describing a car that drove by with young kids recently, he said, “Their eyes were so big…that one look on that little girl’s face made it worth putting the lights up.”

Putting up the display takes about 60 hours, Daryl estimates. Once the lights come down in January, the couple moves on to their next creative endeavor. While it may not be as elaborate, the Hoods put up an impressive Valentine’s Day lights display that is definitely worth checking out.