The Christmas inflatables of Southern Shores

Paul and Carla Borzellino of Southern Shores first began collecting and putting up inflatable Christmas decorations when they lived in Warrenton, Va., adding the characters that their grandchildren liked to their collection each year. When they moved to the Outer Banks in 2013, the couple had about 20 inflatables.

“I remember maybe our first [inflatable] was a little Disney Mickey Mouse,” Paul recalls. “And I just got a kick out of the way you’d have this little bitty box they come in and you plug it in, and it expands and inflates… and is huge compared to the little box that it comes in.”

(This is part of an occasional series on special OBX Christmas Houses.)

Fast forward to 2020, and their house at 16 7th Avenue is adorned during the holiday season with hundreds of icicle lights twinkling from their multiple decks, Christmas villages and most notably, more than 100 inflatable Christmas decorations.

With some towering as high as 20 feet, the inflatable winter wonderland includes Santa Claus sailing in the pool, a festive Star Wars cast, Frosty, the Grinch and more. The display is a work in progress since the Borzellinos are continually adding to it.

Most recently, an inflatable Jabba the Hutt and Hot Rod Santa have been added to the mix, as well as a 12-foot Santa Claus on the crow’s nest who, on windy days, looks like he is dancing and waving to passersby.

Visitors, who number well over 100 on some nights, can park and stroll through the yard, where they will be engulfed by not only all the inflatables, but also by the Christmas spirit. Christmas signs, an outside Christmas movie, cookies and candy canes are all part the experience for visitors.

Another new addition just this week, Paul said, is a donation box for Toys for Tots. 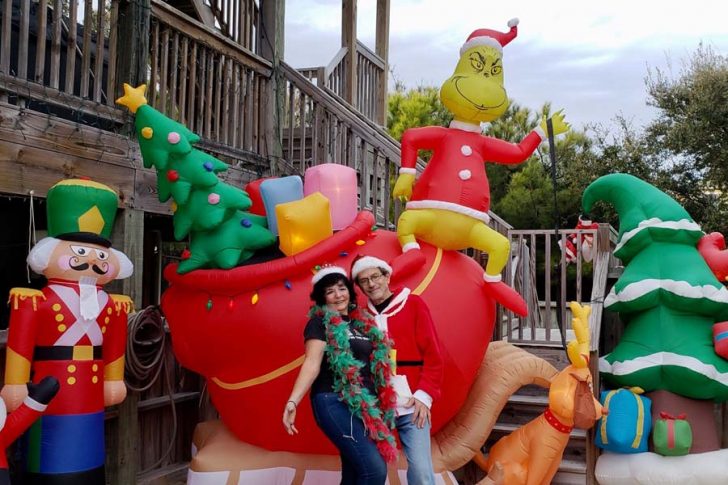 While the Borzellinos acknowledge that the display, which they begin working on around Thanksgiving, requires a lot of effort to set up and maintain, particularly with the wind weather, Carla says the couple sees it as their “gift to the community.” And over the years, more and more people have volunteered to help them set up. “We’re just happy we can do something that makes everyone feel good,” she adds, noting that the look on children’s faces and the gratitude shown by visitors makes it well worth it. “They always were appreciative, but this year [with COVID] they’re even more grateful that they have this to come to.”

“I view myself as kind of a specialist on the inflatables because lots of people try them, but especially with our wind that we have here, it’s tough,” Paul explains. Each one is on a platform that he built, and he uses bricks to secure them in addition to tying them down.

Because of the anticipated wind and stormy weather predicted for Christmas Eve and Christmas Day, Paul says they may have to shut down on those days. But the display stays up through Jan. 5. Lights go on at dark and remain on until about 9 p.m.

While some people choose to drive by, the Borzellinos always encourage visitors to stop and stroll through the display since only about a third of it is visible from the street.

As for visitors finding their home, a 20-foot inflatable Christmas tree is positioned so that you can see it from Duck Road.

Referring to that fact, and the size of the eye-catching display, Paul says: “I have people ask me our [exact] address. But I always tell them you don’t need it. You’ll see it.”

A grand Christmas display in Grandy

‘It feels good in the heart’