WHAT TO WATCH ON TV (& HEAR)
Stream On: A Jean Shepherd Christmas Story

Author Jean Shepherd appeared in a cameo role in his movie A Christmas Story as a department-store employee introducing children to Santa Claus. (IMDb.com)

In 1983 the MGM feature film A Christmas Story changed that holiday for ever. Jean Shepherd’s personal recollection of an Indiana Christmas in the 1940’s became a huge hit and a holiday evergreen. Derived from three chapters in his book In God We Trust, All Others Pay Cash, it told the timeless story of a kid whose only Christmas wish was a Red Ryder Carbine Action 200-shot Range Model air rifle, and the adults who counseled against it, unanimously saying “You’ll shoot your eye out!” The personally reclusive but prolific author and TV and radio personality realized enough money from the movie to essentially retire. He died in 1999 at his home on Sanibel Island, Florida, but thanks to A Christmas Story and the internet, his star continues to shine. 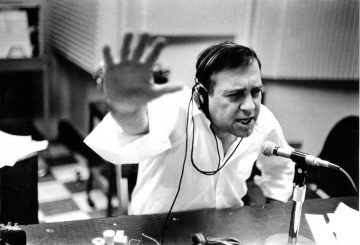 “Shep” on the radio. For years he broadcast a nightly three-hour show of anecdotes and recollections without notes. (Fred McDarrah, The Village Voice)

In the New York City suburbs of 1972, we had a radio in the bedroom, and a 10-inch black-and-white TV downstairs. After supper we, and everyone we knew, would tune in to WOR-AM to listen to Jean Shepherd’s show, which was lightning in a bottle. “Shep” had been broadcasting his stories and anecdotes since 1945 in Indiana, Ohio and Pennsylvania, and signed on to WOR in 1955 where he delighted his fans by telling stories (without notes), reading poetry (especially the works of Robert W. Service, the “Bard of the Yukon” [hear samples and buy Shep’s album here]), and organizing listener stunts.

His most famous stunt was a hoax he created about a nonexistent book, I, Libertine, by fake author “Frederick R. Ewing,” in 1956. During a discussion on how easy it was to manipulate the best-seller lists, Shepherd suggested that his listeners visit bookstores and ask for a copy of I, Libertine, which led to booksellers attempting to order the book from their distributors. Fans of the show planted references to the book and author so widely that demand for the book led to claims of it being on The New York Times Best Seller list. Shepherd, Theodore Sturgeon, and Betty Ballantine later wrote the demanded book [available here], with a cover by Mad Magazine illustrator Frank Kelly Freas.

When he was about to be released by WOR in 1956 for lack of sponsors, he did a commercial for “Sweetheart Soap,” not a sponsor, and was immediately fired. His listeners besieged WOR with complaints, and when Sweetheart offered to sponsor him, he was reinstated. A good selection of his radio stories, which can be listened to or downloaded, is [here].

[Here], in 1974, he reads his story “Duel In The Snow, Or, Red Ryder Nails the Cleveland Street Kid,” which would later become his magnum opus, A Christmas Story.

Shep was a prolific author, too. He wrote a series of humorous short stories about growing up in northwest Indiana and its steel towns, many of which were first told by him on his programs and then published in Playboy. The stories were later assembled into books titled [In God We Trust, All Others Pay Cash; Wanda Hickey’s Night of Golden Memories: and Other Disasters; The Ferrari in the Bedroom; and A Fistful of Fig Newtons]. He wrote columns for the Village Voice and Car and Driver, numerous articles for publications including Mad Magazine, and introductions for books such as The America of George Ade, American Snapshots, and the 1970 reprint of the 1929 Johnson Smith Catalogue (wikipedia). 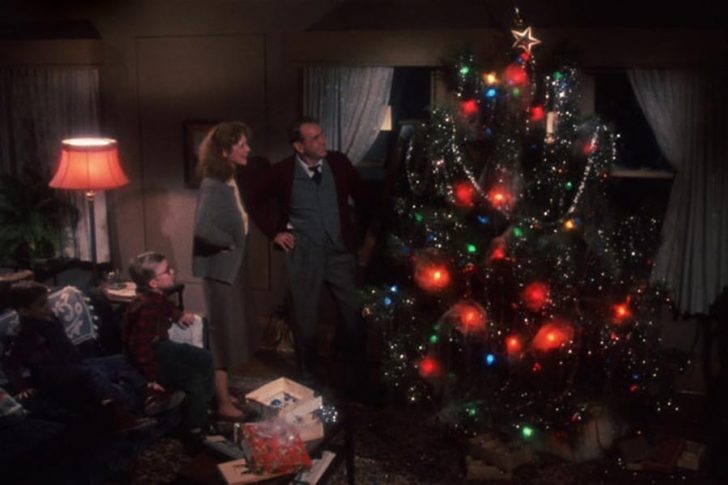 A Christmas Story, “the best Holiday movie ever.” (Warner Brothers)

TV AND A CHRISTMAS STORY

Shep had a checkered television career; in 1960 he had a short-lived local show on WOR-TV. Between 1971 and 1994 he wrote and produced numerous works for both television and cinema, all based on his originally spoken and written stories. He was the writer and narrator of the show Jean Shepherd’s America [of which examples can be found on YouTube], produced by Boston Public Television station WGBH for PBS, in which he visited various American locales, and interviewed local people of interest. He used a similar format for the New Jersey Network TV show Shepherd’s Pie [YouTube], now a rarity.

But everything changed with the film A Christmas Story [official DVD site], the modest warm and hilarious story of Ralphie, who wanted nothing more than to find an air rifle under his tree in 1946 Indiana. In 1983 it spoke to Americans’ nostalgic recollections of their own childhoods. Shep narrated the film as a grown-up Ralphie (and had a cameo appearance as a department-store worker). It was released a week before Thanksgiving in 1983; by Christmas it was still in about 100 theaters, where it remained until New Year’s, slowly racking up admissions. But VCRs were becoming popular, and since then, A Christmas Story has blossomed. In 2019, [a poll] commissioned by TubiTV and conducted by Onepoll ranked the film “Best Holiday Movie Ever.”

A marathon of the film has aired annually on TNT or TBS since 1997 titled “24 Hours of A Christmas Story,” consisting of consecutive airings from the Christmas Eve to the evening of Christmas Day. For cable-cutters, it’s available from [Amazon.com], [Prime Video], and a [wide selection of streaming platforms]. [Here’s a contemporary trailer].

Next time, Happy New Year, from our couch to yours.