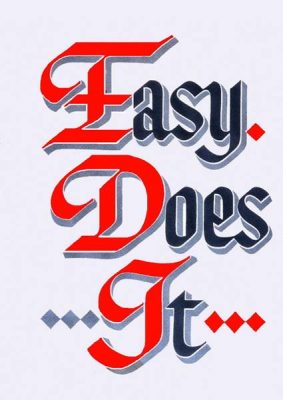 This year has been particularly stressful for everyone. One idea that could be helpful to all is to think of and to “use” slogans that have been useful to members of 12 Step programs for many years.

“One Day at a Time” is often one of the first slogans suggested to a “newcomer”. If we focus on what we need to do today we have the best chance of making good decisions. This also helps to avoid worrying about old behaviors and second guessing ourselves about what we have done in the past. Also, the future will come soon enough and there is no advantage to worrying about what it will bring. One suggestion often made is “You might plan for the future, but avoid being tied to the outcome you want to happen.” Usually “things” work out for the best in the long run.

Another related slogan is “When one door closes another opens”. This is another universally appropriate idea which can be used by anyone. A person may have his/her heart set on the outcome of a situation and is devastated when it does not work out as desired. So often the actual outcome provides advantages that the person never considered as possibilities. And, many stories end with the idea that “if things had worked out as I hoped they would, I never would have been able to do __________ or be_________. And the actual outcome is much more desirable than the originally hoped for result!

“Progress, not Perfection” is an idea which has eventually aided the perfectionist to let go of that goal. After all, no one can be “perfect”, and pushing oneself to achieve perfection can lead only to frustration and anxiety. Rather, noting one’s progress toward a desired goal can be encouraging and supportive.

Remember that these simple phrases may be useful to anyone dealing with frustration, a dilemma, or a situation in which they are dealing with extreme disappointment.

Some others include:  Have a good day, unless you have other plans; Stick with the winners; Be part of the solution, not the problem; Let it begin with me; Just for today; Time takes time; God will never give you more than you can handle; Practice an attitude of gratitude; HALT (be careful to not be too hungry angry, lonely, tired); KISS (Keep it simple, Sweetie); When all else fails, follow directions; Change is a process, not an event.

More:  Fear is the darkroom where negative are developed; Before engaging your mouth, put your mind in gear; A journey of a thousand miles begins with the first step; We’re responsible for the effort, not the outcome; Minds are like parachutes – they won’t work unless they’re open; Serenity is not freedom from the storm, but peace amid the storm; Be careful what you pray for you’re liable to get it; Don’t compare, identify; Live and let live.

Some slogans that may be more clearly relevant to members of 12 Step programs include these:

This has been just a sample of some slogans that have helped people throughout the world and over many years to deal with difficult situations. Anyone who wants to try them may be pleasantly surprised at how helpful they can be.

Jo Ann Hummers, EdD, is a Licensed Clinical Addictions Specialist. She has a private practice at the Nags Head Professional Center. Her work includes DWI assessments and treatment, smoking cessation sessions, and treatment for gambling and other addictions. Thie content of this column is a repeat from previous holiday seasons.