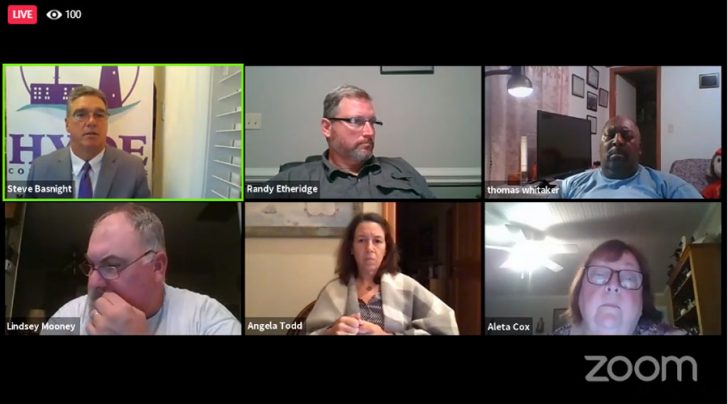 After being briefed by Superintendent of Schools Steve Basnight about the alarming jump in local COVID-19 cases, the Hyde County Board of Education unanimously voted on Dec. 31 to return all students to remote learning at least until its Feb. 2 meeting, when members said they would re-evaluate the situation.

While the district began the 2020-21 school year in fully remote learning, by a split vote on Oct. 27, the board opted to return the district’s three Mattamuskeet schools back to staggered in-person learning. At that same meeting, it voted to keep the district’s Ocracoke School remote while allowing in-person tutoring groups of one to five students.

Basnight offered sobering COVID numbers to the board at its New Year’s Eve meeting, noting that Hyde County in the past 14 days has averaged more than 2,000 positive cases per 100,000 population, a figure that far outnumbers neighboring counties in northeastern North Carolina.

“I think it’s a rather alarming pace right now and we are only subject to go higher in a few weeks with Christmas just being over,” said Board Member Lindsey Mooney. “Lord knows I wanted these kids to be in school, but I’m really concerned at this point that it may not be the best thing.”

Also at its Dec. 31 meeting, the board unanimously voted to suspend athletics until it reconvenes in February. The start of basketball season was slated to begin on Jan. 4 for the district, but that will be put on hold after board members agreed that athletics should be postponed until students are back in school. Board members said they would consider re-instituting athletics at its February meeting.

While Basnight did not offer a recommendation to the board, after the vote he stated that, “We do have students who definitely need to be in classrooms with certified instructors to do well…but we have got to take into consideration the health and welfare of all of our students and all of our staff at the same time. So as major as this decision continues to be each time it comes up, there are no easy answers.”