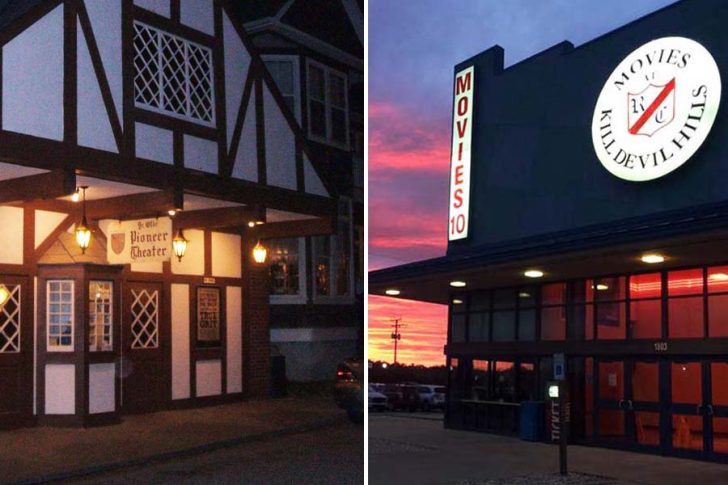 Among the countless businesses that have been severely impacted by the COVID pandemic are Dare County’s two year-round movie theaters — the Pioneer in downtown Manteo and RC Theaters in Kill Devil Hills.

After shuttering their doors for more than six months due to COVID-19 restrictions, the Pioneer re-opened a week after Governor Roy Cooper’s Executive Order, which went into effect on Oct. 2, allowed theaters to operate at 30 percent capacity. RC Theatres held off until Dec. 18 to start the movie reels running again.

Technically, both businesses never really shut down, selling concessions (of course, that included popcorn) even when their theaters were dark. Since they re-opened at limited capacity, both have experimented. For RC Theaters, it’s been private, socially distanced, screenings. The Pioneer decided to buck tradition by staying open on Christmas Day and has also moved its daily showtime from 8 p.m. to 7 p.m. due to the statewide COVID-19 curfew of 10 p.m.

It’s all part of an effort to survive COVID’s massive business disruption in an industry already in flux.

“We are treading water,” Pioneer Theatre owner Buddy Creef told the Voice, referring to the reduced occupancy requirements. At the Pioneer’s 260-seat theater, which his grandfather opened at that location in 1934, the audience is capped at 70 guests for its daily 7 p.m. show to allow for adequate social distancing. Of the current show, he said that Wonder Woman was the first big release and the theater, which typically closes on Christmas, decided to have a showing that day.

“With this crazy year, we thought people would be wanting something to do [on Christmas day] other than being at home,” asserted Creef, adding that the showing attracted a good turnout. The theatre’s Facebook page on Christmas Eve read: “Peace, Love, and Popcorn to each and every one of you out there.”

RC Theatre CEO Scott Cohen said that in deciding when to open the Kill Devil Hills location, he has been taking cues from the company’s other markets in areas like Virginia and Maryland. The movie industry as a whole, he said, has been struggling, which is why he decided to hold off on opening the Outer Banks location in October and November. In December, he said, “We decided to give it a whirl and we’ve been extremely pleased.”

Cohen said the Kill Devil Hills theater is featuring its regular number of films, but the number of showtimes is reduced due to the 10 p.m. curfew. Currently there are seven movies, six with three showtimes and one, Wonder Woman, with eight showtimes.

“We’re live,” Cohen explained. “The industry is changing rapidly and quickly, and we are doing the best we can.” The success of RC’s reopening this month, Cohen added, will determine when the company will debut its new venue that is ready to open its doors in Elizabeth City.

In an additional effort to attract audiences during the pandemic, the Kill Devil Hills RC Theaters is also offering private viewings, where guests can rent out a theater to host a group of no more than 25 people to watch a flick. As a business model, Cohen acknowledged, “it’s a total loser.” But he noted that it gives people two to three hours of escape to go watch a movie in a theater with their immediate contacts during these trying times.

In some markets, Cohen said, the private showings have been extremely popular. As for the Outer Banks, he said, it’s a little too soon to tell, but the bookings are beginning to pick up.

And despite the six months of dark cinemas, both theaters have maintained a connection with the community by offering something everyone loves…movie popcorn and other concessions.

For Creef, whose great grandfather originally began showing films in Manteo next to the Creef Boathouse on Fernando Street in 1918, selling concessions wasn’t a way to maintain an income for himself and his two employees, which includes his aunt who sells tickets at the theater.

“We weren’t drawing a paycheck from it…It was to provide a sense of normalcy to the community, to our customers,” he asserted. As for Cohen, he echoed Creef. “We are there to serve the community…trying to keep connected by offering popcorn, soda and candy.”

Pioneer Theatre has 7 p.m. showtimes daily. “We’re open every night except for high tides and hurricanes and high tides have to be waist deep,” Creef noted. While RC Theaters has been offering daily showtimes since opening on Dec. 18, it will only be open Friday through Sunday beginning the week of Jan. 4. If business is solid, Cohen noted, the company would likely add showtimes on Thursdays as well.

Speaking to the COVID-19 restrictions, both Cohen and Creef said that as per the governor’s orders, socially distancing and mask mandates are enforced for guests unless they are seated and partaking in concessions.

“Our goal is safety, safety, safety,” said Cohen, adding that there have been no COVID-19 cases linked to movie theaters. “You are probably a lot safer than going to a supermarket,” he concluded.