How the NC delegation acted on certifying results 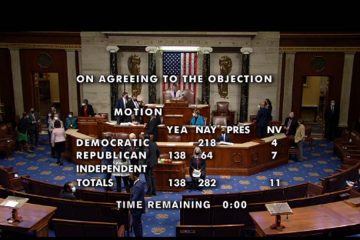 When they arrived back at their desks after the Jan. 6 riot at the U.S. Capitol Building, U.S. House members and U.S. Senators ended up voting on objections to certifying the 2020 presidential election results in two states – Arizona and Pennsylvania.

Here is how North Carolina’s D.C. delegation voted on on the objections lodged by Republicans who opposed accepting the 2020 presidential election results in those two states.

North Carolina’s two U.S. Senators, Republicans Richard Burr and Thom Tillis, both voted against the two objections, choosing to support the results. They had a lot of company as more than 90 of the 100 senators voted against both objections.

In the House votes on the two objections, there was more of a party-line split, with a majority of Republicans voting to support those opposed to accepting the election results.

Gregory Murphy, the U.S. Third District Congressman who represents the Outer Banks, split his vote, siding with Republicans who opposed the Pennsylvania certification and voting against the objection to the Arizona results.

On the Pennsylvania question, all the Republican House Members other than McHenry voted to support the objection.