WHAT TO WATCH ON TV
Stream On: The lady seems historical—Drunk History and (Catherine) The Great 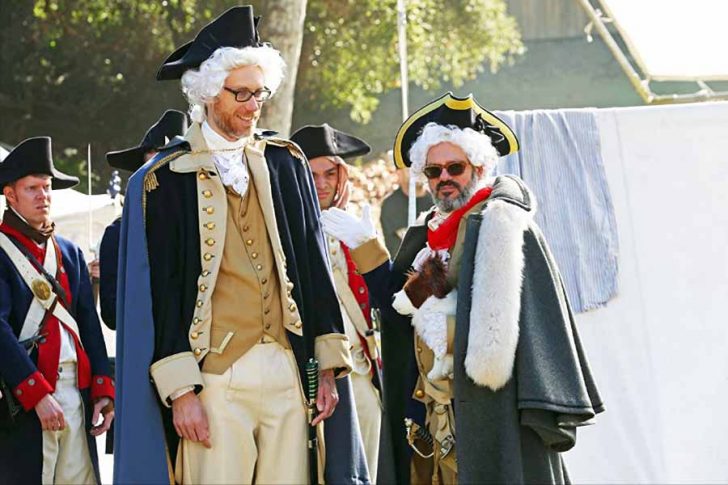 “Strange particles observed by an experiment in Antarctica could be evidence of an alternative reality where everything is upside down” (New Scientist). This is news? On any given day alternative realities are a given on television, and I for one couldn’t be happier.

History may be written by the victors, but when it’s remembered by the drunks, it’s way more fun. This unprecedented Comedy Central series approaches history as filtered through booze, hooch, happy juice, firewater, and occasionally wine. Guest stars are invited to join host Derek Waters in their homes, get liquored up and retell great moments from their town’s history.

The setup is at the guest star’s home, but as they tell the story the action switches to dramatic reënactments with high production values, but bad makeup (bad wigs, fake beards, modern eyeglasses etc.). These feature actors ranging from character actors to A-list comics and stars, miming to the voiceover of the intoxicated guest star, even mouthing off-topic drunken ramblings, belches and hiccoughs. It’s quite an experience, as this clip will show: [The Little DIY Aircraft That Could]: Doug Jones shares the story of “Lawn Chair” Larry Walters’ 15,000-foot-high flight into the sky on a lawn chair attached to 45 helium-filled weather balloons.  See? And even if you confine yourself to root beer or North Carolina’s own [Cheerwine], this show is a hundred-proof gas! 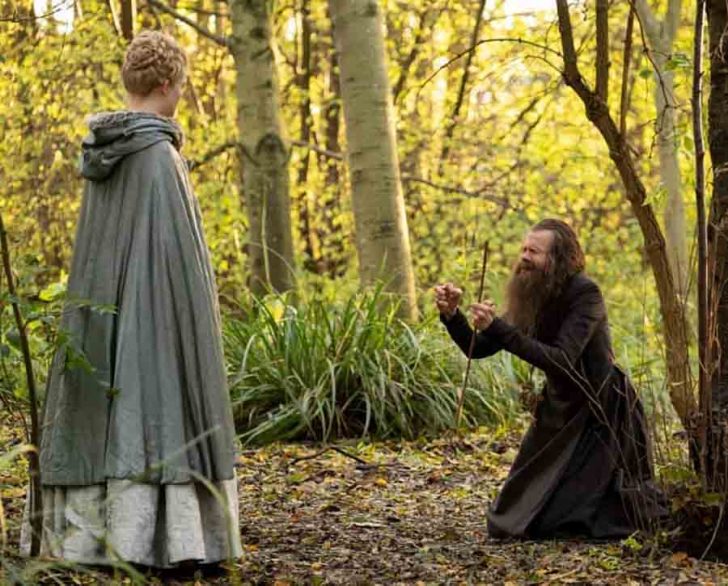 Catherine the Great and Archbishop Archie have a tête-à-tête on The Great. (IMDb.com)

“No sign o’ nuthin’,” said the cop who had first spoken to mother. “This guy,” he explained to the others, jerking a thumb at me, “was nekked. The lady seems historical.” (James Thurber, “The Night the Ghost Got In”)

The Great is a comedic take on the rise of Sophie of Anhalt-Zerbst, commonly known as Catherine the Great, Empress of Russia from 1762 until 1796. The lady seems historical, but she’s hysterical.

According to LA Times TV critic Robert Lloyd, “[Tony] McNamara (The Favorite) had jotted down some names, relationships and a few historical bullet points, torn up the paper, and started writing. And so must the viewer abandon himself to what’s on the plate without a care to learning anything useful or even true about Russia or any of the real people represented here” (L.A. Times).

The Great is described on the title card as “an occasionally true story.”

The first scenes show Princess Sophie, known as “Fike,” and a friend, on garden swings, chatting in 1744 Prussia.

“I overheard my father talking last night,” says Angeline. “He said your father is a fool, that you have practically no money, and that you’ll soon lose everything.”

“They are an expensive fruit and I always equate them with optimism and happiness.”

“Who would marry you? Does this crazy man know your family’s situation? That you have nothing?”

“He cares not for such matters. Emperor Peter and I are about finer things.”

Angeline puts her feet down and stops her swing. “Emperor Peter? Of Russia?”

And so begins the story of Catherine the Great, Empress of All Russia from 1762 until 1796—the country’s longest-ruling female leader. On the way to Russia, practicing her languages, she thinks, “They have bears. I might get one. They look cute!”

When Fike finally meets Peter, he gives her the up and down and says, “You look taller in your portrait,” and to his aides, “Send her back! Get me a tall one,” before dissolving into giggles. “See what I did there? I’m kidding, kidding.”

She presents him with a symbolic spruce branch, and he turns to his aides and says, “She gave me a twig. She’s not another inbred, is she?”

If you watch with the sound off, it looks like any other very opulent historical drama … until the mugging. Sound on, and it becomes a very funny, entertaining and lush show. I should think a lot of money went into it. It lurches occasionally into a feminist screed (the “boys” in the court are pretty obnoxious jocks, who automatically assume that a school Catherine is interested in building is a boys’ school), but maintains its humor throughout. If you’re a fan of costume drama or comedy, this costume comedy should fill the bill.

After they meet, Peter takes his leave of Catherine, saying, “Boy, you’re cute. I have to get back to my whores … horse … horses. Going riding. Hmm.”

Next time, put off by the historical settings of Shakespeare or the Bible? We have just the thing.