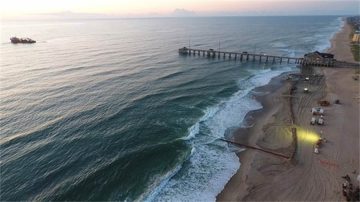 The Dredge Liberty Island pumps sand onto the beach near Jennette’s Pier in Nags Head early on Sunday, July 28, 2019. (www.nagsheadnc.gov)

County plans to fund sand pumping efforts in both Southern Shores and Avon by withholding $1.4 million in beach re-nourishment funds from each of the five oceanfront communities was met with some pushback from Nags Head Commissioners at their Jan. 6 meeting while sparking a broader discussion on funding mechanisms for these projects.

During a presentation to commissioners, County Manager Bobby Outten explained that both Southern Shores and Avon need beach nourishment, but that the current $8.5 million in the county’s fund falls short of what’s needed to help finance the two projects. But, he said, reducing the county’s contributions for replenishment efforts to each town by $1.4 million – the same amount the towns received in a state grant this fall for beach nourishment projects – would free up enough money to do so.

“We got lucky, I suppose, at least from my perspective,” Outten told the Nags Head Commissioners.

Expressing dismay about the loss in revenue, commissioners voiced concern over how the beach nourishment fund – which comes from a portion of the occupancy tax – is divvied up among the towns, asked about assurances of future funding and wondered whether there was a better source of funding that could be explored other than occupancy tax revenues.

Commissioner Michael Siers, referring to the state grant, contended the county was trying to “retrieve grant money that we received for damages from Dorian.”

In response, Outten asserted: “That’s not correct…We are not taking any of your money. You got a grant that had nothing to do with Dorian or anything else, it was just a grant. We got one as well.”

For his part, Commissioner Webb Fuller suggested the county needed a formula that provides some degree of certainty about how much each community is going to receive in the future and asked if funds were being dispersed fairly.

Outten responded that such a formula already exists, one that projects 10 years into the future.

“You assume none of that has occurred but the [beach nourishment model] shows you what we are going to give each community into the future,” he said. Speaking of equity, the county manager said, “every community has skin in the game because everybody is going to be taxed.”

In response to a question by Commissioner Renee Cahoon about whether Avon property owners on the west side of N.C. 12 would be taxed, Outten said the community would likely be faced with a 40-cent tax on oceanside property and a 10-cent tax in other areas of the community to help fund its project.

Following Outten’s presentation, Commissioner Kevin Brinkley observed that, “What the county is doing is, they already spent money out of that fund, but yet he’s coming to us now asking for our blessing, our okay, to spend the rest of the money for the projects.”

At the conclusion of the discussion, commissioners considered the need to pursue different funding options for beach nourishment and floated the idea of local professionals in the field forming a working group to explore those options. Mayor Ben Cahoon said he would suggest a gathering of the mayors following COVID-19 guidelines to discuss possibilities.